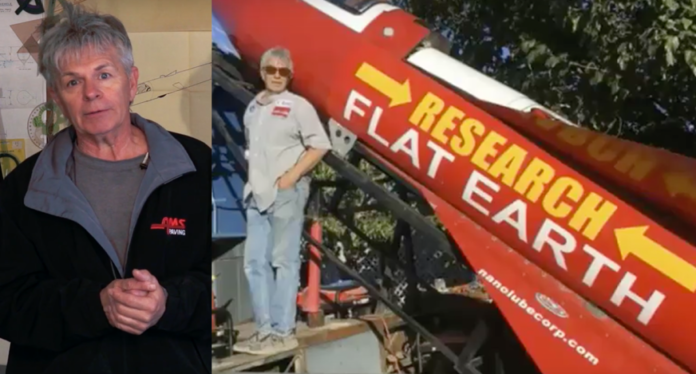 A 61-year old man named Mad Mike Hughes is trying to promote flat Earther theory by launching a $20,000 homemade steam-powered rocket into the sky from a “launch pad” that is actually a mobile home he bought on Craigslist and converted to a ramp. Hughes’ primary sponsor is a group called Research Flat Earth. Even though Hughes doesn’t believe in science, he does believe the Earth is flat.

“A guy who builds his own rocket in his garage, about to jump a mile is pretty cool,” Hughes said. “It’s the most interesting human-interest story in the world.”

Researching a flat Earth is apparently still a real thing, and has a few notable celebrity followers, like rapper B.o.B.

The existence of an alternate worldview has been popular with lots of people lately, with discussions of Earth 2 appearing in the media. Statistician and writer, Nate Silver wrote about the scenario of Earth 2, or how the world would look had Hillary Clinton won the presidential election. It’s a world most progressives fantasize about today…but the flat Earth thing seems more in line with the Trump administration and their denial of the overwhelming science of climate change.

The #Earth is #Flat and the #Sun isn't 93 million miles away just look at #FlatEarth for Yourself pic.twitter.com/xrlygsSWrZ

The big day for Mike comes on Saturday. The location is a remote area of the Mojave Desert along Route 66, according to Newsweek.

“If you’re not scared to death, you’re an idiot,” Hughes told the AP. “It’s scary as hell, but none of us are getting out of this world alive.”

On the morning of the launch, Hughes will heat about 70 gallons of water in a stainless steel tank and then blast off between 2 p.m. and 3 p.m. He plans to go about a mile — reaching an altitude of about 1,800 feet — before pulling two parachutes. They’re discouraging fans — safety issues — but it will be televised on his YouTube channel. He said he’s been in contact with the Federal Aviation Administration and the Bureau of Land Management.

Following in the tradition of American stunt performer, Evel Knievel, Mad Mike had set a World Record in 2002, but not for a rocket. That one was for the “longest limousine ramp jump.” But Hughes apparently doesn’t hold Knievel in high regard.

“He was an average stunt guy,” said Hughes, a former motorcycle racer. “He stole his look from Elvis.”

He moved on to rockets in 2014, shooting himself 1,374 feet into the air and barely surviving after his parachute had become tattered and the G-forces took a toll on his body.

In 2015, Mad Mike Hughes talked about why he planned on trying to break the world record in a “jump” of his steam rocket over a half mile at an event called, “The Madness in Mojave.” His prior jump left him and two others injured, according to his interview. This time he marketed his launch through Kickstarter and talked about the limited viewing and memorabilia that crowd-funders would receive.

Hughes mentioned nothing about a flat Earth theory, but he did say he didn’t believe that NASA had launched anyone into space….ever.
(See the interview below)

“I’m the last person who’s put a man in a rocket and launched ’em,” said Hughes.

Hughes talked about his rationale for his rocket launch back then, though going farther into space is now very much his priority. It’s not clear exactly how that would prove the Earth is flat.

“There’s [sic] several reasons we are doing this. One is to instill people to do great things with their lives. Ok, instead of watching TV, or Fantasy Football, or what’s happening on Xbox, or who’s your friends on Facebook, actually getting out in the garage, building something, and setting records, but ultimately, all of this is going to lead to another Kickstarter. We hope in six months for me to go into space. We want to do this and basically thumb our nose at all these billionaires trying to do this,” said Hughes.

Watch out Elon Musk and SpaceX. You’ve got competition. We sincerely hope that Mad Mike survives his launch, but would prefer he left the risk up to NASA.

If Hughes does survive, or comes to his senses and doesn’t launch himself into the sky, he plans to run for Governor of California.

See the interview with Mad Mike Hughest below: