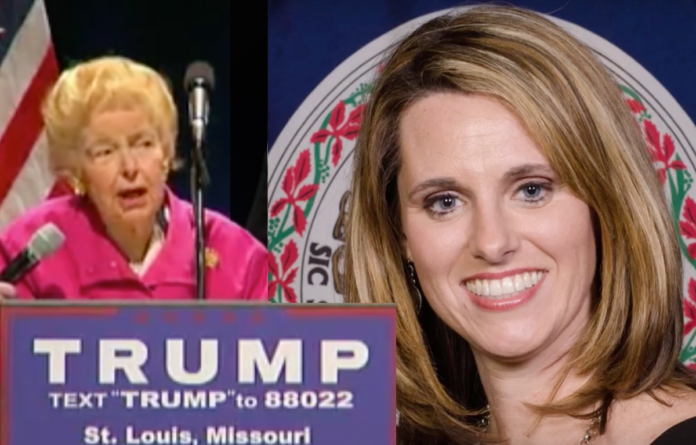 When New York Representative Carolyn Maloney reintroduced the bipartisan ERA in 2005, she pointed out the absurdity of not protecting women here at home.

Consider what the ERA proposes to change in the Constitution. It would include this simple sentence in Section 1:

“Equality of rights under the law shall not be abridged by the United States or by any State on account of sex.”

While most Americans still think our Constitution protects equality for women, it does not. That’s why Congress passed the ERA in 1972, but it needed 38 states to ratify the amendment. In the end, only 35 endorsed because of the Stop-ERA campaign led by the anti-feminist, Phyllis Schlafly.

With her law degree behind her, Schlafly began speaking engagements with words designed to purposefully annoy feminists:

“I’d like to thank my husband for letting me be here tonight.”

She would then do what conservatives always do, incite fear based on a slippery slope argument. With much hyperbole, she alleged that changing the Constitution to protect women would lead to horrible extreme things. But as a privileged white woman, how could she speak with any authority on the culture of abuse, misogyny, and oppression faced by women in America?

According to US History.org, Schlafly argued the ERA would lead to all sorts of harm for women:

“Protective laws like sexual assault and alimony would be swept away. The tendency for the mother to receive child custody in a divorce case would be eliminated. The all-male military draft would become immediately unconstitutional. Those opposed to the ERA even suggested that single-sex restrooms would be banished by future courts.”

Schlafly’s supporters incited fear by hanging signs on baby girls that read “Don’t draft me.” Then they baked apple pies for the Illinois legislature as the debated the vote for the amendment. Because of tactics like these, however illogical they might seem, the ERA never made it. Women are still not protected in our Constitution.

Schlafly, a St. Louis native, died in 2016 at the age of 92, but not before she endorsed Donald Trump for President.

The conservative Republican would no doubt have enjoyed watching Trump’s egregious antics today, but she would also have enjoyed hearing the news from the Washington Post. Petula Dvorak writes a scathingly beautiful rebuke of a woman who seems to have picked up Schlafly’s anti-equal-rights baton. That woman is a successful white woman from Richmond, Victoria Cobb.

Victoria Cobb was on the Ed Martin Show last evening discussing the ERA. The ERA movement is growing even though the concept doesn't have any more merit now than it had when it was first introduced. Listen here: https://t.co/98qUR2AEiV

Dvorak notes that Cobb’s lobbying efforts helped block the ERA from reaching the House floor in Virginia, even though the GOP-led Senate had passed the bill. But she didn’t act alone.

“Cobb’s crusade was helped along by that subcommittee’s chair, the equally stunning and storybook-perfect Del. Margaret B. Ransone (R-Westmoreland).” Ranson refused to talk with Dvorak, saying she was “too busy.”

Well, it shouldn’t surprise anyone that here is Ransone endorsing Brett Kavanaugh, one of the most scandalous appointments to the SCOTUS in history accused of sexual assault and misconduct, just like Trump.

Congratulations to newly nominated Justice Brett Kavanaugh. Thank you President Trump for nominating an exceptional American, and experienced judge, to the Supreme Court. I hope and pray he will uphold the constitution as is written.

Perhaps it shouldn’t surprise anyone that these women would stand against equal rights.

After all, Cobb has fought against abortion rights since sixth grade and learned to fight the ERA from her grandmother. She is married to a lawyer who once “played a role in regulating commonwealth abortion providers” as Virginia’s deputy secretary of health and human resources.

Cobb used slippery-slope tactics that would no doubt inspire Schlafly.

“Cobb pegs most of her anti-ERA crusade on abortion, convincing folks that somehow, if women were to finally be included in the constitution, it would mean all kinds of public money would be funding abortion,” writes Dvorak.

In fact, Cobb and her fellow conservatives exploited the topic of abortion in order to gain traction for once more shooting down the ERA. They join Trump in disparaging the governor of the state of Virginia, Ralph Northam, as if the former pediatric neurologist enjoys killing babies. It’s all pure political theatrics.

Victoria Cobb @TFFVA: We're glad to see people are finally paying attention to the radical attempts by #Democrats in #Virginia. This is not the first year they’ve introduced this bill. It’s getting attention because NY has passed something egregious…https://t.co/AOpTpIzj7q

Aside from logical fallacies, Dvorak points out the obvious reason why people like Cobb, Ransone, and Schlafly are out of touch with why the ERA is necessary. They are privileged white women who have so many advantages that they can’t even comprehend what it’s like for millions of other women.

“These women occupy a very privileged place in American society, and they hold up their very tidy lives as proof that the ERA is unnecessary.”

All the Republicans in state legislatures seem to need is one token reason for shooting down the ERA. Then they can say, “See, there’s an actual woman who says she doesn’t want it.” And so it goes, a token woman appears, one who spews ludicrous slippery-slope arguments designed to incite fear, not reason. The Republican representatives take it and run with it and pretend the ERA isn’t necessary, all while condoning a culture of rape and misogyny by turning a blind eye to the men they vote to the highest levels of our government and courts.

Congratulations Victoria Cobb and Margaret Ransone. Phyllis Schlafly would be so proud, but the rest of us? Not so much.

Hear Victoria Cobb talk about her stance against the ERA below:

See more about Phyllis Schlafly below: