The United States Blues
Home News A retired American general is shredding Trump on Twitter – Without ever... 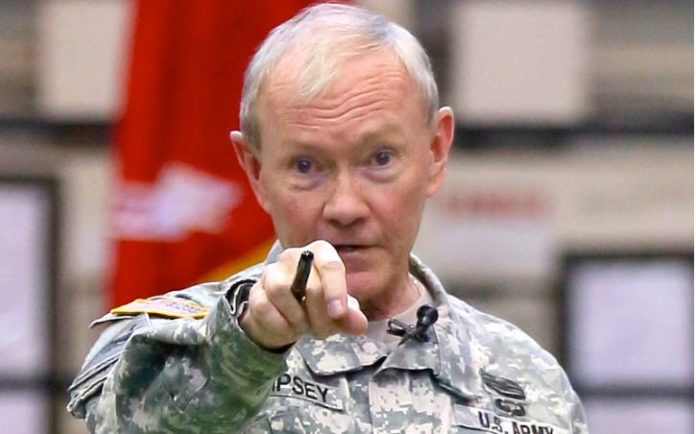 Retired General Martin Dempsey served as chairman of the Joint Chiefs of Staff in the Obama administration, has been offering what he calls “lessons on leadership” on his Twitter feed, and it’s quite clear he doesn’t think much of President Donald Trump’s so-called leadership style.

“A balm in an inflamed social media universe, (Dempsey’s) account dispenses mini-sermons and sensible advice, often for an unnamed audience of one who uses Twitter as a delivery vehicle for insult and fabrication.

“The general would never take on a commander in chief directly; none of his posts mentions President Trump by name. But the daily trolling, mild by Twitter standards, is unmistakable.”

Though Dempsey has never once mentioned Trump by name, there’s no doubt who his tweets are aimed at. For example, here’s one he posted after the 35-day government shutdown ended:

Leadership: the art of motivating people to act toward achieving common goals. Brinksmanship: the art of pushing a confrontation to the limit of safety to force a desired outcome. One is persuasive, the other coercive. One feels like success, the other like failure. #Leadership

A day earlier, Trump said he might declare a national emergency in order to get his border wall built. Dempsey tweeted out:

In solving complex problems and resolving contentious issues, the most effective leaders use their influence much more than their authority. The goal is to solve problems so that they stay solved. Solutions imposed rarely last. #RadicalInclusion

In 2017, when Trump claimed that President Obama had failed to call the families of slain American service members, General Dempsey posted this:

POTUS 43 & 44 and first ladies cared deeply, worked tirelessly for the serving, the fallen, and their families. Not politics. Sacred Trust.

And the general also weighed in when Trump decided in late 2018 to send American troops to the border to repel what he called an “immigrant invasion.”

Our men and women in uniform are better trained, better equipped, and better led so they meet any threat with confidence. A wasteful deployment of over-stretched Soldiers and Marines would be made much worse if they use force disproportional to the threat they face. They won’t.

But perhaps the tweet Trump most needs to take to heart was sent by Dempsey in January:

Trust. Years to build, seconds to break, forever to repair. The one, non-negotiable, indispensable, ingredient of leadership. An everyday, all-the-time factor in any productive relationship. #Leadership

Thank you for your service and your wisdom, General Dempsey. Both are needed now more than ever.