The United States Blues
Home Politics Congress A year and a half after he resigned, Al Franken now says... 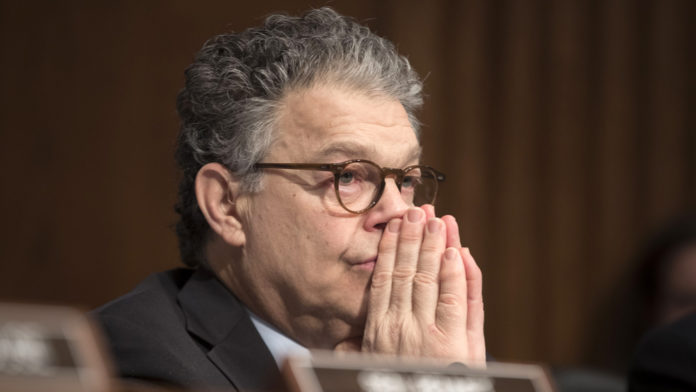 Though it seems like it’s been much longer since he left the U.S. Senate, Al Franken officially resigned just 18 months ago, on January 2, 2018, after being accused of sexual misconduct.

In a profile written by Jane Mayer and appearing in the New Yorker, the Minnesota Democrat now says he wishes he had appeared before the Senate Ethics Committee instead of resigning:

“The idea that anybody who accuses someone of something is always right ― that’s not the case. That isn’t reality.”

A closer look at the accusations made by Franken’s main accuser, conservative talk-radio host Leeann Tweeden, reveals that most of what she’s said doesn’t match with reality, according to Mayer, who on Monday tweeted out:

“Almost NOTHING His Main Accuser Said checks out. Sometimes the first draft of history is wrong ― especially when no one fact checks it.”

As for what Tweeden accused Franken of, that too deserves a second look. HuffPost reports:

Tweeden accused Franken of a pattern of sexual harassment while they were on a U.S.O. tour together in December 2006. She’s said the then-comedian, who was gearing up for his first run Senate run at the time, wrote a skit that included a kissing scene so he would have the opportunity to kiss her.

She said Franken forcibly kissed her while rehearsing the skit, and took a photo while she was sleeping at the end of the tour in which his hands are outstretched toward her breasts.

Yet Franken maintains that Tweeden’s version of events is “just not true.” According to him, he wrote the skit years earlier and had performed it with others, none of whom complained. While the former Senator says he “genuinely” feels bad that he posed for the photo in question without Tweeden’s consent, he continues to maintain that he was merely “goofing around.”

And as it turns out, many of Franken’s Senate colleagues now say they regret ever calling for his resignation:

Leahy, who was first elected to the Senate 45 years ago, told the magazine that calling for Franken’s departure was “one of the biggest mistakes I’ve made.”

It also needs to be noted that right-wing media was also actively seeking to make sure Franken was no longer in the Senate. In particular, Fox host Sean Hannity went out of his way to beat the drum for Franken’s removal from his Senate seat.

Specifically, Hannity “exulted when the news broke,” Mayer writes, repeatedly attacking Franken on Fox News and his radio show. The Fox host referred to the photo as “disgusting,” and even went so far as to allege that Franken had been accused of of “sexual molestation.” None of that was true, of course, but when has truth ever been a standard for Hannity or Fox?

Traylor Portman, who played the Tweeden role in Franken’s skit, said she feels the former Senator got a raw deal:

“I get the whole #MeToo thing, and a whole lot of horrible stuff has happened, and it needed to change. But that’s not what was happening here. Franken is a good man. I remember him talking so sweetly and lovingly about his wife.”

But the damage is done. Franken is no longer in the Senate and likely will never run for office again. Should he have taken the tasteless photo that wound up sinking his career? Of course not. But should he have been forced from the Senate for that photo and accusations that now seem to be less than solid? We may never know. But we do know that we lost one of the most eloquent and effective progressive voices when he resigned.