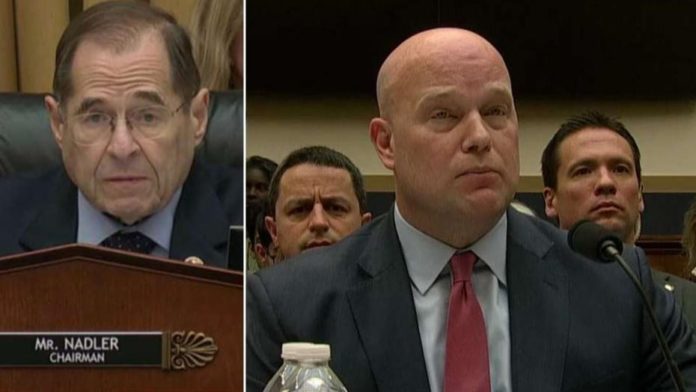 “In your capacity as acting attorney general have you ever been asked to approve any request for action to be taken by the special counsel?”

Rather than respond, Whitaker told the chairman:

“Mr. Chairman, I see that your five minutes is up and so.”

There were audible gasps and nervous laughter in response to what Whitaker said. He then added:

“I am here voluntarily, we have agreed to five-minute rounds.”

Nadler rebutted Whitaker by reminding him the five-minute rule had not been enforced on his opening statement.

Ranking Republican Rep. Doug Collins (R-GA) suggested a recess in the hearing, but Nadler noted Whitaker was in the middle of answering a question and he expected a response.

Acting as if he had forgotten the question, Whitaker asked the chairman to repeat it. Nadler again asked:

“In your capacity as acting attorney general have you ever been asked to approve any request for action to be taken by the special counsel?”

“I want to be very specific about this, Mr. Chairman, because I think it will allay a lot of fears that have existed among this committee, among the legislative branch largely and maybe amongst some American people. We have followed the counsel’s regulations to a tee. There’s been no event, no decision that has required me to take any action and I’ve not interfered in any way with the special counsel’s investigation.”

And while Whitaker’s answer may have satisfied Nadler for the moment, it also places the acting AG in legal jeopardy if he has done anything contrary to his statement, which was made under oath. Keep in mind others have already been indicted by Special Counsel Robert Mueller for lying to Congress. And Whitaker could be, too.