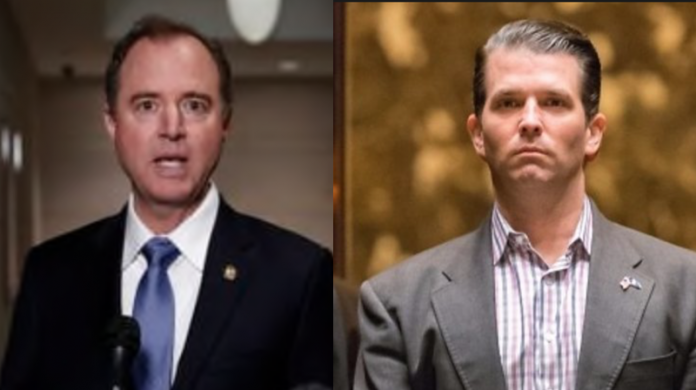 Rep. Adam Schiff (D-CA), chairman of the House Intelligence Committee, says he thinks the infamous June 2016 meeting at Trump Tower with Russian nationals attended by Donald Trump Jr. was “treasonous and unpatriotic” and that it’s abundantly clear the Trump campaign had the “intent to collude” with Russia.

Appearing as a guest on the UnPresidented Podcast, Schiff noted that the facts suggest members of the Trump campaign were making every effort to have multiple contacts with Russian officials:

“Certain things are beyond doubt and the first is, the Trump campaign, in the form of Don Jr., and the campaign chairman Paul Manafort, and the son-in-law Jared Kushner, were more than interested in getting the help of the Russian government. So in terms of intent to conspire, intent to collude, that’s pretty darn clear.”

On the issue of collusion, Schiff said there is “ample evidence” that collusion with Russia did indeed take place:

“There is ample evidence on the issue of collusion. The question of whether it rises to the level of proof beyond a reasonable doubt as to a criminal conspiracy is a different question, and one that ultimately Bob Mueller will have to answer. And that even may not be answered completely if the Justice Department takes the position, which I think is flawed, that you can’t indict a sitting President…. This is the challenge, in that the country is so stovepiped now in how it gets its information.

“Now, it’s very difficult to break through and help people see what’s right before their eyes. But these secret discussions to make money from Russia during the campaign, that the president and his organization were having, that Paul Manafort was having with his Russian contacts, at the same time the Russians clearly wanted something from Donald Trump and his campaign in the form of sanctions release, all goes to the issue of collusion, all goes to the issue of conspiracy, and you really have to be willfully blind not to see just how alarming this is.”

Earlier this week, Schiff announced that the intelligence committee will expand its investigation of President Donald Trump to determine if undue influence had been exerted on Trump and his administration as a result of financial attachments Trump may have to countries such as Russia, Saudi Arabia, and the UAE, issuing a statement that read in part:

“The President’s actions and posture towards Russia during the campaign, transition, and administration have only heightened fears of foreign financial or other leverage over President Trump and underscore the need to determine whether he or those in his Administration have acted in service of foreign interests since taking office.”