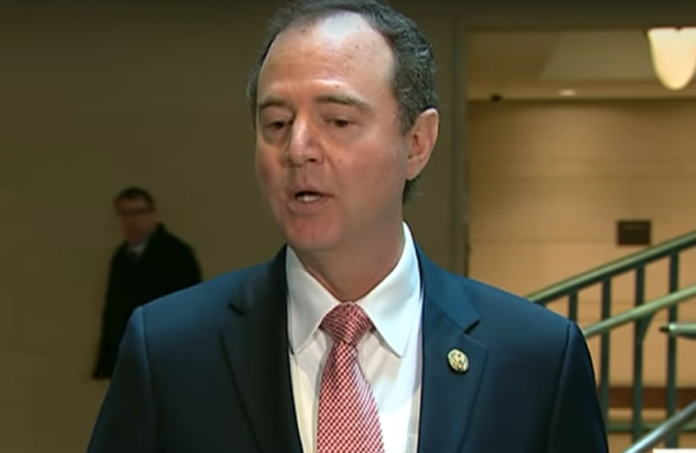 Despite the decision by Republicans on the House Intelligence Committee to shut down their Russia probe, Rep. Adam Schiff (D-Calif.) has vowed to continue on.

Earlier this month, the GOP prematurely ended the investigation, drawing condemnation from Schiff.

If Russians have leverage over the President, GOP has decided that it would rather not know. The minority’s work continues: pic.twitter.com/oOf13n75Vo

Schiff also responded when President Donald Trump praised the end of the probe and proclaimed that there was no collusion between his campaign and the Russians.

This was not the finding of the House Intelligence Committee, Mr. President, but only a statement by its GOP members, who lack the courage to stand up to a President of their own party when the national interest necessitates it. https://t.co/ZC1T5BUKS1

Schiff even informed Trump that the committee did find evidence of collusion.

Mr. President, the Committee reached no such conclusion — only Republicans. In fact, we did find evidence of collusion, despite GOP members being more interested in protecting you than learning the truth. When accusing others of lying, best not to misrepresent facts yourself. https://t.co/fIuKPGyEN1

Schiff has said in the past that the committee has evidence of collusion and obstruction.

And now we get a new revelation from Schiff that Republicans blocked Democratic motions to subpoena Bannon.

“We had a series of motions to hold Mr. Bannon in contempt, as well as about a dozen motions to require subpoenas for those who refused to answer questions.”

“We also moved to issue subpoenas for a wide set of documents. We’ll continue to press the majority to make the votes on those issues public, as well as the discussion, and the debate that occurred around them.”

“Suffice it to say, though, the majority was not interested in conducting a further investigation, even when the flaws in what we have done so far has become so apparent over the course of the last week.”

Schiff continued before declaring that Democrats will continue the work and noted that witnesses are still talking to them.

“Our work will go on nonetheless. We will be submitting minority views. We will also be conducting additional interviews and obtaining additional documents. That work has never stopped. We are very pleased that witnesses have decided to continue to cooperate with our committee even if the majority will not be participating, but a rather sad chapter in our committee’s long history.”

Bannon spent much of time during his testimony on Capitol Hill phoning the White House to ask which questions he could and couldn’t answer. Bannon repeatedly invoked executive privilege on behalf of Trump, a move that frustrated the committee members, many of whom wanted to hold Bannon in contempt.

Schiff said at the time that:

“The breadth of that claim of executive privilege is breathtaking and insupportable and indeed, at times, it was laughable.”

Had the committee subpoenaed Bannon, he would have been forced to answer the questions put before him. Of course, he could have invoked the Fifth Amendment, but that means that Bannon could incriminate himself in Trump’s alleged crimes if he were to answer.

Unfortunately, Republicans were clearly uninterested in getting the truth, choosing instead to end the investigation rather than be forced to come to an uncomfortable conclusion based on the evidence.