The United States Blues
Home News Adam Schiff taunts Trump for being too scared to release the full... 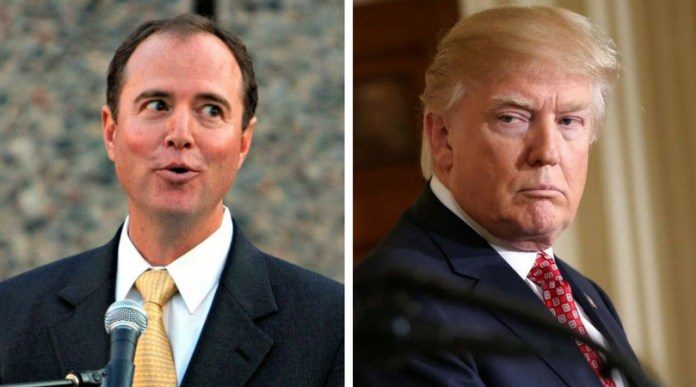 House Intelligence Committee chairman Adam Schiff (D-Calif.) stood up to President Donald Trump again on Tuesday after attacked him on Twitter and insisted everyone move on from the Mueller report.

Thus far, the only thing the American people and Congress have seen about the report is a short summary by Attorney General William Barr alleging that the report clears Trump of conspiracy but does not exonerate him of obstruction of justice, although Barr chose not to pursue charges because he is Trump’s new fixer.

For that reason, Democrats have been demanding the release of the full report because even if Mueller could not find enough evidence of collusion, that doesn’t mean there isn’t evidence at all. Furthermore, Mueller clearly must have included evidence of obstruction. The entire report is around 400 pages in length, so there must be some pretty damaging stuff about Trump in there if Trump and his cronies are so desperate to bury it and keep it hidden.

Trump has even said he supports releasing the full report, but he changed his tune on Tuesday morning while taking shots at Schiff.

Schiff responded by reminding Trump that the House voted unanimously to release the full report and called Trump a coward.

The House voted 420-0 to release the full Mueller report to the public.

What are you afraid of, Mr. President? https://t.co/yHDCjGNJnD

Schiff expanded upon his Twitter remarks later on and doubled down on suggesting that Trump fears what the report says.

“It looks like the president…is concerned about that,” he told Politico. “He ought to live up to what he said earlier. He ought to support the full release. None of that should be redacted. But clearly, he’s concerned about that coming out. If he is feeling so confident about what it says, then you would think he would urge its full release. But clearly, he’s not. And you’d have to ask him why.”

The why is easy to answer. Trump knows the report is damaging to him and he’s too frightened to let the American people see the whole truth.

It really is that simple. And it’s exactly why the whole report must be released for all to see, even if it does incriminate Trump.