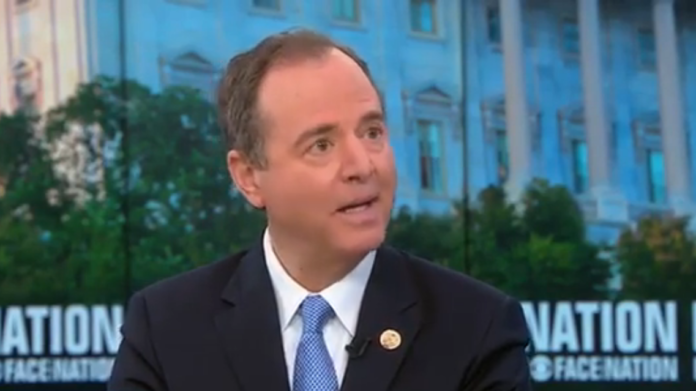 Rep. Adam Schiff (D-CA) has a sobering message for President Donald Trump: Once he leaves office, Trump could be looking at decades behind bars for his alleged crimes.

During an appearance on “Face the Nation” Sunday morning, Schiff was asked by host Margaret Brennan for his take on this week’s sentencing memos filed in the case of Trump’s former attorney, Michael Cohen. Schiff responded:

“My takeaway is there’s a very real prospect that on the day Donald Trump leaves office the Justice Department may indict him. That he may be the first president in quite some time to face the real prospect of jail time.”

The California Congressman also noted that while many people are speculating who exactly the president may pardon in the weeks ahead, it could well be a President Pence pardoning a disgraced Trump:

“We have been discussing the issue of pardons that the president may offer to people or dangle in front of people. The bigger pardon question may come down the road as the next president has to determine whether to pardon Donald Trump.”

Schiff ended his comments by saying that while Trump may think he’s above the law, he’ll learn in time that all the money and power in the world can’t protect a person if they’re guilty:

“The idea that while people are out walking precincts and doing what they should do in campaigns, the rich and powerful seem to live by a different set of rules. So this was the argument for putting Michael Cohen in jail on these campaign violations. That argument I think was equally made with respect to Individual-1, the president of the United States.”

For his entire life, Trump has used his money and connections to avoid spending a day in jail, despite actions he’s taken which may well prove to be illegal. But now he’s in the biggest spotlight of all, and it doesn’t look like he’s going to be able to buy, lie, or wriggle his way out of this current predicament.