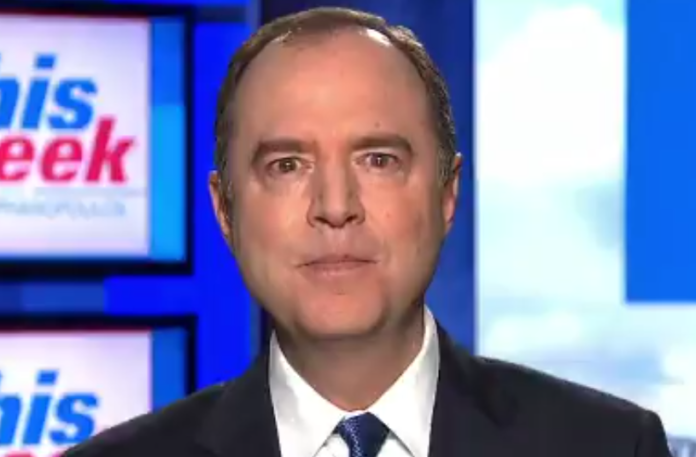 After all, the report has yet to be read and Republicans are already declaring Trump vindicated, including Rudy Giuliani as ABC host George Stephanopoulos pointed out to Schiff.

“I think Mr. Giuliani would be wise to wait until the report is made public before making any pronouncements about vindication,” the California congressman responded. “And likewise, people should wait to determine just how incriminating it is. We know the special counsel was not permitted to indict a sitting president and we ought to see what evidence he produced, both on the issue of conspiracy as well as on the issue of obstruction of justice. So Mr. Giuliani would be wise to do something he has rarely done and that is wait until we see the facts.”

Rep. Adam Schiff: “I think Mr. Giuliani would be wise to wait until the report is made public before making any pronouncements on vindication.”

“Mr. Giuliani would be wise to do something he has rarely done, and that is wait till we see the facts” https://t.co/aOlVgoW7E8 pic.twitter.com/zENUxH2bcM

Schiff then explained that House Speaker Nancy Pelosi (D-Calif.) refused a classified briefing on the report because Democrats want the full report released to the public without delay.

Schiff also confirmed that impeachment is still possible because even if Mueller can’t indict Trump, the report could be damning enough to justify impeachment.

Rep. Adam Schiff says “it’s too early” to tell if Congress will no longer consider impeachment.

“If there were overwhelming evidence of criminality on the president’s part then Congress would need to consider that remedy if indictment is foreclosed” https://t.co/lJVN6LmxEQ pic.twitter.com/QlPQm5p4b9

“Congress’s responsibility is very different, and that is it’s our responsibility to tell the American people these are the facts. This is what your president has done, this is what his key campaign and appointees have done, these are the issues that we need to take action on, this is potential compromise. There is evidence, for example, quite in the public realm, that the president sought to make money from the Russians, sought the Kremlin’s help to make money during the presidential campaign while denying business ties with the Russians. That is obviously deeply compromising. And if its this president’s view that he still wants to build that tower when he is out of office, that may further compromise his policy towards Putin, towards Russia and other things. It’s our duty to expose that and take corrective action.”

“If it is this president’s view that he still wants to build that tower when he is out of office, that may further compromise his policy towards Putin, towards Russia” https://t.co/ou7KWMQ5KO pic.twitter.com/IQmD2CJb7b

Make no mistake, Trump has not been cleared of any wrongdoing. It’s just that Mueller can’t indict per controversial Justice Department guidelines. It doesn’t mean Mueller did not detail evidence of Trump’s criminal activity or even include a recommendation to pursue charges once Trump leaves office.

Republicans seem to think that Mueller’s report should end all investigations against Trump. Their bias and status as Trump stooges are obvious, and it’s the reason why Americans put Democrats in control of the House to pursue the probes the GOP refused to do.