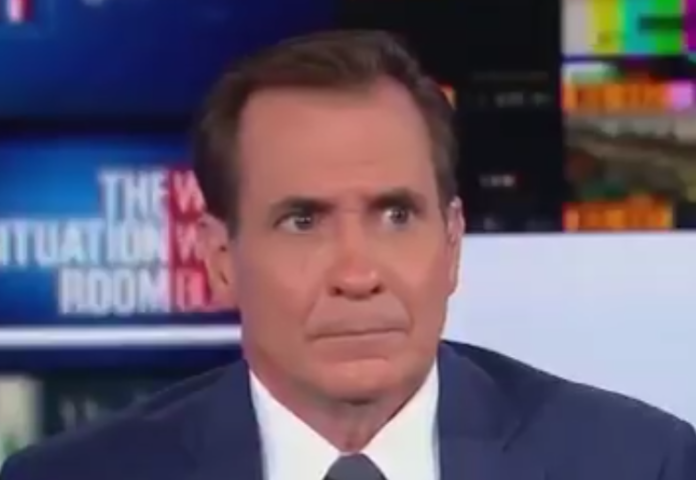 Retired Admiral John Kirby did not think highly of President Donald Trump’s July 4th speech at all, likening it to an “8th-grade history lesson” that Trump himself couldn’t even get right as he desperately tried to associate himself with the military despite being a five-time draft dodger.

As rained poured down during his event, Trump attempted to demonstrate his knowledge of American military history, only to get caught making sh*t up about how the Continental Army captured British airports during the Revolutionary War.

“In June of 1775 the Continental Congress created a unified Army out of the Revolutionary Forces encamped around Boston and New York, and named after the great George Washington, commander in chief,” Trump said. “The Continental Army suffered a bitter winter of Valley Forge, found glory across the waters of the Delaware and seized victory from Cornwallis at Yorktown. Our Army manned the air, it rammed the ramparts, it took over airports, it did everything it had to do and at Fort McHenry under the rocket’s red glare had nothing but victory. When dawn came, the star-spangled banner waved defiant.”

The problem is that flight had not even been close to being invented yet and airplanes did not become a weapon of war until World War I in the early 20th century.

Once again, Trump tried to make himself look smart, only to prove how much of a dumba** he really is, and his supporters ate it up because they also know nothing about history.

Trump’s July 4th propaganda rally failed and even Kirby responded with ridicule, but only after first warning that Trump is trying to use the military’s popularity to help himself.

“Each time he gets around military troops or assets he tends to politicize them and I think they get drawn more and more into his appropriation of the military for his own personal gains,” Kirby began. “He’s wrapping himself in the flag and around these troops and around these aircraft because he knows they are very popular with America and because he knows he’ll get applause lines and I think he’s trying to appropriate that popularity for himself.”

“This is not about how we won our independence,” Kirby continued. “Fourth of July is about declaring independence. And the Founders were very suspicious about having a standing army or standing navy to begin with. It should not be about the military. All this focus is fairly 8th grade history on the military bothers me.”

Trump is using the military as a prop, which is wrong in so many ways. He is treating America like a reality show, and it’s a bad show because the showrunner has no credibility. He stood there and urged young people to enlist in the military, something he never would have done himself because when he had the chance to fight for our country during the Vietnam War he dodged the draft like a coward. Frankly, the military should be ashamed of themselves for going along with Trump’s charade.