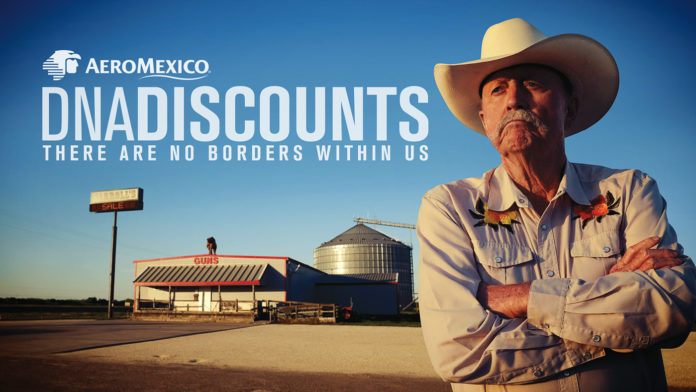 AeroMexico, the national airline of Mexico, may have just won the 2019 award for trolling with their new ad campaign that pokes a giant finger in the eye of President Donald Trump.

The ad, which highlights the airline’s new “DNA Discount” pricing plan, offers reduced rates on flights from the U.S. to Mexico for Americans who have Mexican DNA. The higher percentage of Mexican lineage you have, the deeper the discount.

In a video of the ad, which was created and shot by the Ogilvy ad agency, features this voice-over as its beginning:

Shot in Wharton, Texas, residents talk about their negative thoughts of Mexico. One remarks:

“Let me stay here in peace and let those folks stay on their side of the border.”

Another person says he likes tequila and burritos just fine, but doesn’t care for Mexico.

The ad also cites data from the Department of Homeland Security showing that Mexican immigration in the south dates back to the 1800s:

That means that a big percentage of Americans are part Mexican “and don’t even know it yet. So we did a DNA test to prove it and turn those results into discounts,” the ad notes.

Those who took the DNA tests have widely differing thoughts on the results, with one smiling and admitting:

“I do love discounts.”

Another, however, refuses to accept the findings, commenting:

The tagline for the ad is “there are no borders inside us.”

And perhaps best of all is that AeroMexico’s ad comes on the heels of the ongoing government shutdown and Trump’s demand for billions of dollars to build a wall on the Southern border, which he has repeatedly promised that Mexico will pay for. With that as the backdrop, the ad campaign may not only boost the airline’s bottom line, but also serve as a reminder that no matter where we come from or where we live, we’re all have DNA and that connects us in a level no wall can possibly hope to eliminate.