The United States Blues
Home Health After he got schooled by Justin Trudeau on a woman’s right to... 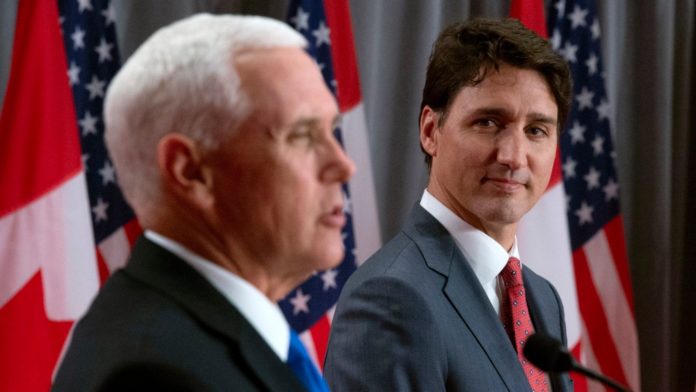 Vice President Mike Pence was criticized by Canadian Prime Minister Justin Trudeau on the topic of abortion rights while Pence visited with Trudeau in Ottawa on Thursday, and rather than have an actual debate on the issue, the VP resorted to lies, talking points, and propaganda to defend his extreme position on a woman’s right to choose.

At a press conference after the two leaders met, Trudeau noted:

“I highlighted to the vice president that there was a significant amount of concern amongst Canadians on the new anti-choice laws being passed in American — a number of American states… Canadians and this government will always be a staunch defender of women’s rights and a woman’s right to choose.

“It’s a shame that we increasingly see conservative governments and conservative politicians taking away rights that have been hard-fought over many, many years by generations of women and male allies.”

And that’s when Pence began lying, attempting to paint Democrats as heartless:

“Our administration has taken steps to stand for the sanctity of life, at home and abroad. What we found troubling is the Democratic Party in our country and leaders around the country supporting late-term abortion, even infanticide.

But those are debates within the U.S., and I know that Canada will deal with those issues in a manner the people of Canada determine most appropriate. For President Trump, for me, for our administration, we’ll always stand for the right to life.”

Democrats don’t support infanticide, which also happens to be illegal in all 50 states. President Donald Trump has also used this line, and as PolitiFact noted at the time, it’s a blatant lie:

Trump said, with a late-term abortion, “the mother meets with the doctor. They take care of the baby, they wrap the baby beautifully. And then the doctor and the mother determine whether or not they will execute the baby.”

Trump grossly oversimplified of one of the hardest choices parents face. We rate this claim False.

Americans overwhelmingly support a woman’s right to choose, and most national Republicans are distancing themselves from the extreme anti-choice laws passed recently in Alabama, Georgia, Missouri, and other states. The issue could well energize female voters and those who believe the government has no place in the most difficult decision any woman will ever have to make. The GOP may have handed the 2020 election to Democrats with their extreme position on the issue.