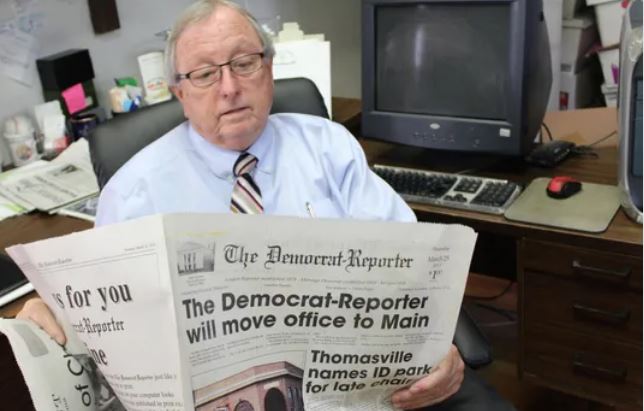 Goodloe Sutton is the editor and publisher of the Democrat-Reporter newspaper in Linden, Alabama, and he says it’s time for the Ku Klux Klan (KKK) to return and “clean out” the nation’s capital.

In an editorial he wrote for his newspaper, Sutton called for the KKK to attack Democrats:

“Time for the Ku Klux Klan to night ride again. Democrats in the Republican Party and Democrats are plotting to raise taxes in Alabama.”

The editorial goes on to allege that Democrats “do not understand how to eliminate expenses when money is needed in other areas.

“This socialist-communist ideology sounds good to the ignorant, the uneducated, and the simple-minded people.”

Speaking with the Montgomery Advertiser, Sutton doubled down on his ignorant ranting:

“If we could get the Klan to go up there and clean out D.C., we’d all been better off.”

How exactly would Sutton define having the Klan “clean out” Washington, D.C.? Sutton eagerly replied:

We’ll get the hemp ropes out, loop them over a tall limb and hang all of them,

However, Sutton was quick to noted that he wasn’t  “calling for the lynchings of Americans.”

Those he’s politically opposed to, Sutton told the Advertiser:

“Are socialist-communists we’re talking about.”

Sutton also attempted to compare the KKK to the NAACP, even making excuses for the Klan, which has been designated as a domestic terrorist organization:

“A violent organization? Well, they didn’t kill but a few people. The Klan wasn’t violent until they needed to be.”

Also in his editorial, Sutton urges the KKK to “raid the gated communities up there” and refers to Democratic members of Congress as “the ruling class.”

The Alabama Press Association (APA) says they don’t condone Sutton’s racist screed, but noted that it doesn’t have the authority to stop him from publishing whatever vile things he decides to print:

“We do not agree with the opinion. However, APA is not a policing agency. We simply have no authority over what our member newspapers publish.”

People like Goodloe Sutton are exactly the kind of bigoted know-nothings we have far too many of in this country. We can only hope they will eventually be replaced by more intelligent, rational, and tolerant individuals. 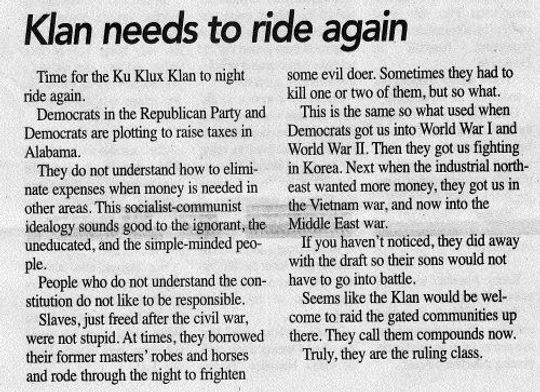