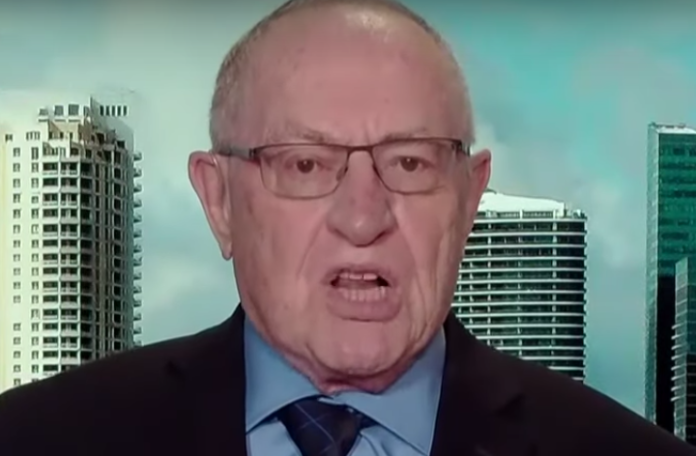 Alan Dershowitz has now weighed in on the news that Roger Stone, a longtime GOP operative and associate of President Donald Trump, was arrested Friday morning after being indicted by Special Counsel Robert Mueller. And, of course, he threw a tantrum about it.

Early Friday morning, the FBI came knocking on Stone’s door in Florida to arrest him on seven counts, including obstruction of justice, witness tampering and lying to Congress in connection with his communications with Wikileaks during the 2016 Election.

When asked for comment on the indictment by Fox News host Bill Hemmer, Dershowitz criticized it.

“It’s a typical Mueller indictment,” Dershowitz said. “Very heavy on stories involving collusion and Wikileaks but the indictment itself all relates to obstruction of justice, tampering with witnesses. In other words, crimes that occurred as a result of the investigation.”

“This is typical of Mueller,” he continued. “He has found almost no crimes that occurred before he was appointed special counsel.”

Dershowitz continued ranting about Mueller and how he allegedly has not found any evidence of collusion with Russia or Wikileaks. He even accused Mueller of trying to squeeze those he has indicted into making up stories so that he can get Trump.

Bill Hemmer went on to point out that the indictment alleges that Stone had contact with Wikileaks, and Dershowitz flipped out.

Asked why it took two years for Mueller to indict Stone, Dershowitz concluded his remarks by opining that the indictment was likely sealed or Mueller was just using the time to build a case, but continued to insist that it’s all mostly a story that investigators are trying to sell.

“There may have been a sealed indictment for a while,” he said. “But they were probably trying to build up the case. They didn’t want one count or two count — they wanted a seven-count indictment, so maybe they took some time to that. Maybe they were negotiating. We don’t know that, there’s no evidence of that. Look very hard at this indictment and distinguish between the crimes and the story.”

Just like when Dershowitz was wrong when he claimed lying to the FBI “is not a crime” and that Michael Flynn is innocent, he is wrong about Stone’s communications to Wikileaks.

According to a report by The Atlantic:

Russia used WikiLeaks as a conduit—witting or unwitting—and WikiLeaks, in turn, appears to have been in touch with Trump allies. The key remaining questions are what WikiLeaks knew and what Trump himself knew.

In July 2018, an indictment from Mueller’s team offered the most detailed accounting of why Russian intelligence was the likely culprit for the hacks, and detailed how Russia passed the emails to WikiLeaks through a persona called Guccifer 2.0, named after another hacker.

We already know that Russia used Wikileaks to make Hillary Clinton’s emails public after they hacked the DNC and the Clinton campaign in July 2016 upon a request made by Trump himself when he asked Russia to find the emails.

This isn’t just a “story” that someone made up as Dershowitz wants everyone to believe. Federal prosecutors don’t just make up stories without evidence. Mueller has to have evidence to make these claims. And Dershowitz wouldn’t really know what evidence Mueller has because he is not privy to the inner workings of the investigation. He’s an outsider who is desperately trying to protect Trump, even if it means dragging his own reputation through the mud. And he’s sinking deeper into that mud every time he attacks a legitimate federal investigation.