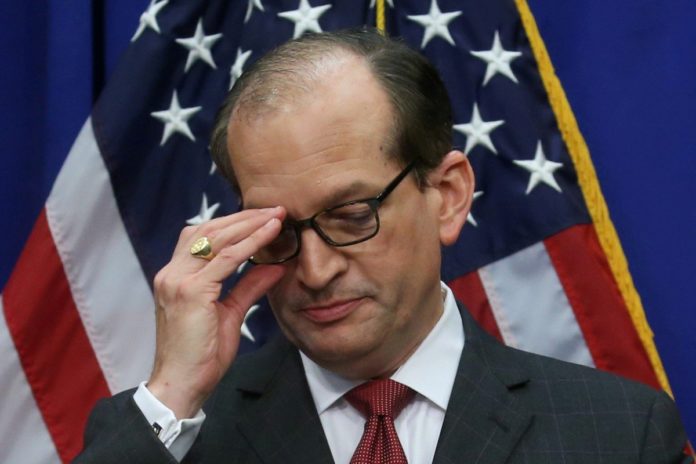 In a move that would certainly help billionaire pedophiles and child sex traffickers like Jeffrey Epstein, Secretary of Labor Alex Acosta has proposed an 80 percent budget cut to a program that helps sex trafficking victims.

Back in 2008, Acosta served as U.S. Attorney for the Southern District of New York. He had a chance to put Epstein away for life on charges of child sex trafficking and pedophilia. The evidence and witness testimony in the case would likely have buried Epstein. But Acosta came to his rescue by offering him a “sweetheart deal” that allowed him to serve just 13 months in jail and he could leave jail to go to his office basically any time he wanted.

Ten years later, Acosta is now Secretary of Labor thanks to President Donald Trump, a close friend of Epstein’s, and he is apparently determined to make life easier for child sex traffickers by gutting the funding of a critical agency within the Department of Labor that fights trafficking.

According to The Guardian:

Acosta’s plan to slash funding of a critical federal agency in the fight against the sexual exploitation of children is contained in his financial plans for the Department of Labor for fiscal year 2020. In it, he proposes decimating the resources of a section of his own department known as the International Labor Affairs Bureau (ILAB).

The bureau’s budget would fall from $68m last year to just $18.5m. The proposed reduction is so drastic that experts say it would effectively kill off many federal efforts to curb sex trafficking and put the lives of large numbers of children at risk.

Acosta has already been slammed once before over his scheme to cut this funding by Rep. Katherine Clark (D-Mass.), who grilled Acosta during a hearing.

“I’m sure you’ve come prepared to justify this cut to us, but it doesn’t go unnoticed that this isn’t the first time that you’ve ignored human trafficking,” Clark observed. “How can we expect you, the Labor Secretary, to fight for American workers if you couldn’t even fight for these girls?”

Indeed, it definitely looks as if Acosta is in the tank for human traffickers because of his actions.

And Clark slammed Acosta again in the wake of Epstein being arrested and charged by the Southern District of New York over the weekend.

“This is the program within the Department of Labor that really promotes a fair global playing field for workers in the United States and specifically it does it by looking at forced labor for children and human trafficking, all that sexual exploitation that sadly we see too often,” Clark said. “What it showed me is that Secretary Acosta has a pattern of not recognizing the priority of these issues. He certainly did that in Florida when he chose the powerful and the wealthy over child victims and a 53-page indictment that had been put together by his office.”

Acosta is clearly compromised on the issue of child sex trafficking and should immediately resign in disgrace. He enabled Epstein to continue this sick practice and he’s continuing to enable it now on a larger scale by trying to cut the budget.

He should be ashamed of himself, especially since he has kids of his own.