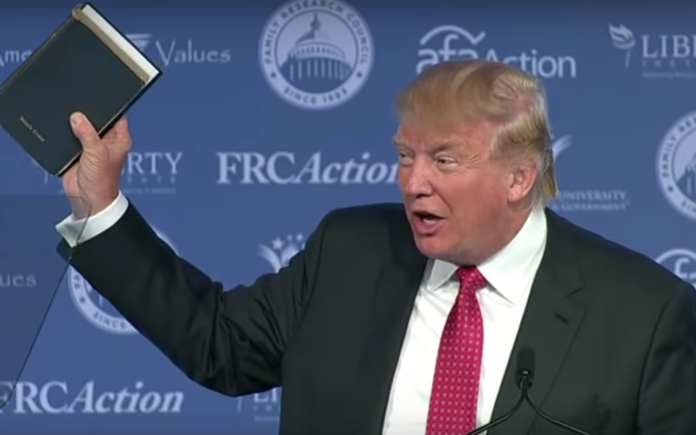 Separation of church and state is the foundation stone on which our nation was built, but President Donald Trump ignored it on Monday to endorse Bible classes in schools in a Twitter post that caused all hell to break loose.

Republicans in several states have introduced bills to put Bible classes in schools that students supposedly can “volunteer” to take.

Trump apparently saw the report on Fox News and immediately tweeted his support.

One Twitter user pointed out the connection to Fox News, which Trump watches throughout the day during his “executive time.”

In case you’re wondering about the president’s sudden interest in the Bible.

Other Twitter users called out Trump’s hypocrisy or slammed him for violating the Constitution.

A reporter really should ask Trump to name, specifically, his favorite passage of the Bible. https://t.co/cOmiRemU9U

The Holy Bible, The Constitution of the United States, any book that doesn’t have pictures…”What are things Trump has never read?” Correct! https://t.co/nOyiLA04d7

This is Trump directly opposing the very foundation on which the US was established
Everyone is free to study the Bible – after school. https://t.co/HjRpbXxUf3

Trump doesnt give a shit about Christianity nor the bible … just playing to his gullible base as always https://t.co/dMxPJBnH1u

so sayeth The Great Phony Christian, who once seriously discussed taking the oath of office with his hand not on a bible, but on a copy of The Art of The Deal. EVERYTHING ABOUT THIS CRETIN IS FAKE, PHONY, AND ILLEGITIMATE. GO TO HELL, TRUMP.

Trump is now tweeting about Bible literacy classes, the sign of a desperate man losing his supporters. In a few seconds he’ll quote Jesus on the Wall, Hillary’s emails and how many of the Ten Commandments are Fake News

Start with Psalm 37 and get back to me. https://t.co/dTWNhvKvdC

Clearly, Trump is pandering to his evangelical base in the aftermath of his cave to Democrats on the government shutdown, which caused cracks in their support of him.

How do we know this? Because it’s happened before in Florida. After a school district allowed Bibles to be handed out to students, the Satanic Temple and atheists demanded equal time, forcing the school to block the distribution of the Bible.

The same will likely occur when schools start offering Bible classes. Again, there’s a reason why religion does not belong in schools. Not every American practices Christianity. Furthermore, these classes could be easily hijacked by religious extremists to preach anti-gay and anti-women beliefs or even the belief that rebellious teens should be stoned to death, while pressuring students to convert. This is why Bible classes are not a good idea and it’s why the president of the United States should not endorse them in schools.