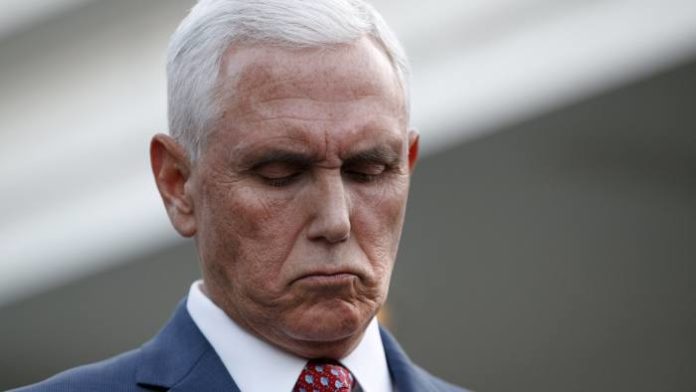 As the impeachment inquiry into President Donald Trump’s Ukraine scandal continues to gain momentum and new witnesses testify before the House impeachment committee, allies of Vice President Mike Pence are growing worried that the growing investigation could also wind up destroying him.

Carol Lee of NBC News said Tuesday on “Morning Joe” that those who support Pence are urging the White House to release any evidence which might “clear Pence’s name,” such as releasing a reconstructed transcript of Trump’s phone call to Ukraininan president Volodymyr Zelenzsky:

“People around the vice president think this is a way to clear his name. They think this could tarnish him, and he does not really answer directly what his knowledge was about this, about the pressure campaign on Ukraine, and so there’s worry there.”

“We’ve spoke to an administration official who said that they’re still reviewing this, and I think that really underscores how much this White House still hasn’t gotten its act together in terms of getting on the same page and coming up with a plan to push back on impeachment.”

Co-host Willie Geist then asked Lee if she thought Pence would eventually turn on Trump in order to save himself:

“He’s a longtime politician, he’s not a dumb guy, he knows what he’s doing. (Is there some instinct) to begin to preserve himself and his own legacy, if that can be done at that point? He sees the writing on the wall. He’s going to see this new testimony from (Lt. Col. Alexander) Vindman today. Is he working behind the scenes to save himself?”

Lee noted that for now Pence is remaining loyal to the president:

“We know that people who are allies of the vice president are a little — you know, worried that he’s not going to come out of this squeaky clean, and that’s because, you know, there’s one of two options. Either he was aware that all of this stuff was going on and he didn’t say anything or do anything about it, or he was actually a participant in some of it. Neither of those things are good for the the vice president.”

Pence has staked his own political fortunes to those of a man he had to have known was less than honest and prone to making questionable decisions. If Trump’s impeachment winds up bringing down the vice president, too, Pence won’t have anyone to blame but himself.