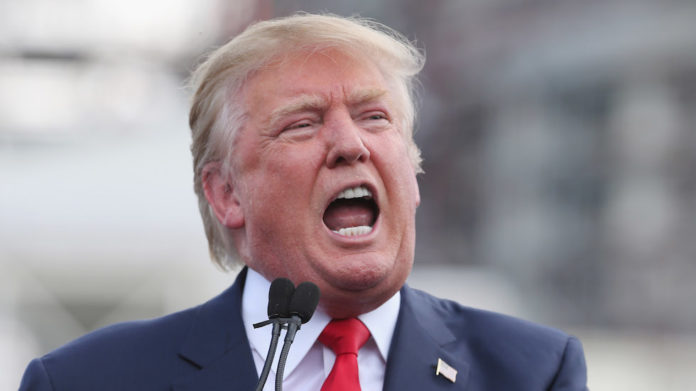 Not content with the trade war he picked with China — which on Thursday resulted in the Chinese saying they will no longer place orders for American soybeans — President Donald Trump thought it would be a great idea to open a new front in his ongoing effort to destroy the U.S. economy, announcing via Twitter that he would impose tariffs on everything coming into the country from Mexico:

On June 10th, the United States will impose a 5% Tariff on all goods coming into our Country from Mexico, until such time as illegal migrants coming through Mexico, and into our Country, STOP. The Tariff will gradually increase until the Illegal Immigration problem is remedied,..

….at which time the Tariffs will be removed. Details from the White House to follow.

By the way, the U.S and Mexico are in the middle of trade negotiations, and even top White House staffers are shaking their heads at Trump’s latest enormous misstep, according to The Washington Post:

“[S]ome White House aides are trying to talk him out of it, arguing that such a threat would rattle financial markets and potentially imperil passage of the USMCA trade agreement.”

Unfortunately, Trump isn’t bright enough to realize that you don’t threaten to impose sanctions when you’re in the middle of finalizing a trade deal. Art of the Deal? Try Art of the Dumb.

So now we stand on the verge of a trade war with both China and Mexico, and as Ted Genoways, a contributing writer for Mother Jones and The New Republic notes, that is a recipe for economic disaster:

“If [Trump] attempts a simultaneous trade war with China and Mexico, the farm economy—and the U.S. economy—will plummet.”

What, you may rightly ask, is going on here? Easy. It’s the old bait and switch in an attempt to change the topic. Robert Mueller said Wednesday that Trump wasn’t exonerated and would have been indicted if it wasn’t for a Justice Department memo that doesn’t allow that to happen. So Trump needs to create a diversion. He’s going to toss the U.S economy into the toilet so we won’t pay attention to his crimes.

Need another reason the Bonehead-in-Chief needs to be impeached? He just gave us one that may well destroy the world economy.