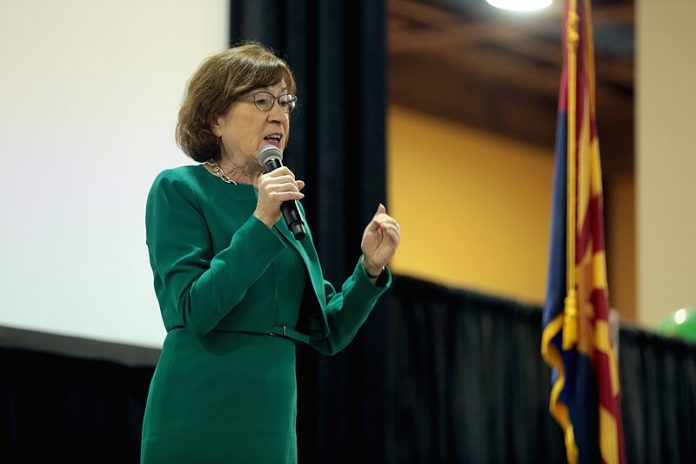 Senator Susan Collins (R-Maine) just found out that her 2020 re-election bid is going to be a whole lot more difficult after Supreme Court Justice Brett Kavanaugh made her look like a complete tool by voting to kill abortion rights in Louisiana in a recent 5-4 ruling.

At the height of the Kavanaugh hearings on Capitol Hill, Collins took to the Senate floor to declare her support of the conservative judge who had been accused of attempted rape just days earlier, and proclaimed her belief that he won’t vote to overturn abortion rights in this country.

“Finally, in his testimony, he noted repeatedly that Roe had been upheld by Planned Parenthood v. Casey, describing it as precedent on precedent,” Collins said. “When I asked him whether it would be sufficient to overturn a long-established precedent if five current Justices believed it was wrongly decided, he emphatically said no.”

She believed him even though multiple women’s groups repeatedly pleaded with her to vote against him. And now she has egg on her face.

Because on Thursday, Kavanaugh dissented in a case challenging a recent anti-abortion law in Louisiana that would impose a burden on women’s reproductive health clinics by enacting draconian rules designed to reduce the number of clinics offering the procedure to just one, which means tens of thousands of women in the area who seek an abortion would not be able to get one.

Only because Chief Justice John Roberts joined the majority in the decision did the high court rule to block the law for the time being. And Kavanaugh proved Collins to be a liar.

That’s why Twitter lit her up after the ruling and Americans declared war against her.

Despite the cries of “hysteria” during our fight to stop Trump’s extremist SCOTUS pick, we knew this day would come—Kavanaugh is waging all-out war on Roe v. Wade. @SenatorCollins intentionally misled women across this country, and she must be held accountable. pic.twitter.com/YbXsV8TQ8S

Trump Justices — Kavanaugh and Gorsuch –dissented in this case that would have ended legal abortion in Louisiana. We were called hysterical for expressing concern they would rule against #RoeVWade and our fundamental freedom but here we have it. Everyone who fought, I see you. https://t.co/nrwx2yUseE

Senator Susan Collins, Senator Cory Gardiner and every single one of you that claimed Kavanaugh was no threat to #RoeVWade or precedent: you own this. This case was decided TWO tears ago by SCOTUS and would and legal abortion in Louisiana. Shame. https://t.co/nrwx2yUseE

I hope @SenatorCollins gets tagged in every single “justice keg stand is taking away a woman’s right to choose” thread. https://t.co/4bHTlOpzvm

Collins knew full well Kavanaugh would not respect precedent on abortion. She voted for him anyway. This was our ad in September 2018 at the height of the Kavanaugh battle. pic.twitter.com/rZImEupp9d

Make no mistake: Kavanaugh has declared war on Roe, and Susan Collins’ claim that he would respect precedent on abortion has been exposed as a scam. We’re running ads in Maine to hold Collins accountable. You can help by donating here: https://t.co/K5umc8f5Do

“Susan Collins gaslighted millions of Americans claiming we were hysterical in believing that Justice Kavanaugh would vote to overturn precedent. His decision in the Louisiana case proves us correct.”Senator Collins, you broke it, you bought it.” @ilyseh https://t.co/kxv9UDWY9C

Perhaps the most prominent declaration of war came from horror author Stephen King, who previously vowed to see her ousted from office if she voted for Kavanaugh.

Has Susan Collins responded to Brett Kavanaugh’s dissenting vote siding with the conservative Supremes in the Louisiana case?

With just one vote, Kavanaugh made Collins’ 2020 Senate race a top target for Democrats. In the end, she is going to regret voting to confirm him after all the times she has claimed to be pro-choice. Clearly, she lied to the people of Maine and women across the country. And they will all remember in November 2020. Collins will forever be known as a betrayer of women at a time they needed her the most.