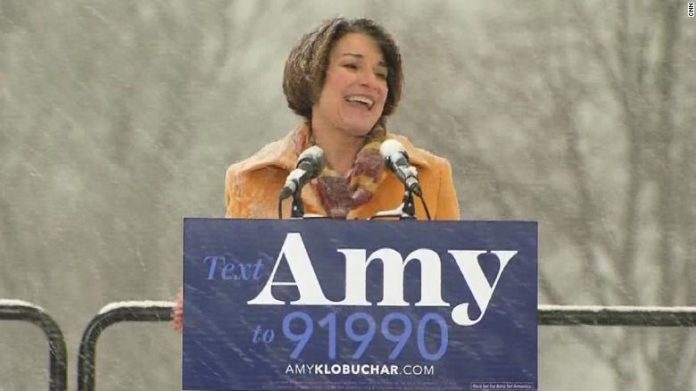 And Klobuchar is off to a great start, having raised $1 million in just 48 hours, The Hill reports. She actually even received a donation from all 50 states within just 20 minutes of her announcement earlier this week.

In the 48 hours after her presidential announcement, @amyklobuchar raised more than $1 million from “online and grassroots” donors, per her campaign.

But some people spin Klobuchar as a grouchy boss who has high standards, Vanity Fair reports. There’s been scuttlebutt about her supposed outbursts for years and this is worrisome — and unfair.

As you can see in the video below.

Reportedly he had this to say, according to The New York Daily News:

“The embarrassment is to have bimbos like you with nothing between your ears,” he allegedly tweeted.

@Dallas_Observer @dallasnews This is from an elected city council member from Richardson in what is supposed to be a non-partisan position. pic.twitter.com/Amtde9i4iG

This is the ridiculousness that powerful women have to fight.

Klobuchar has taken progressive stances on healthcare, fought to decrease student debt, and criticized Trump’s hysteria on immigrants, Elle reports. She’s stood up for the little Guatemalan girl who died after being taken into custody by Border Patrol officers.

7-year-old Jakelin Caal Maquin’s death was a tragedy. At a Judiciary Cmte hearing I asked the Commissioner of Customs & Border Protection if he regretted some of their policies. He did not bring up this death or report it within 24 hours. We need answers. pic.twitter.com/1NVHCb0Bjv

Klobuchar has gone to bat for women’s rights. And the Coalition To Stop Gun Violence endorsed her when she ran for re-election in 2018.

But there’s talk that she threw office supplies at her staff at one point and there are unflattering comparisons to Trump.

It remains to be seen whether Klobuchar needs to do damage control in this instance because she’s an unfamiliar face to many voters. And that could be a problem.

“When nobody knows you, everything is potentially damaging, if there’s a constant drumbeat of negative stories,” Democratic strategist Mo Elliethee told Vanity Fair.

She is perhaps, most notable for her fiery grilling of Kavanaugh, and despite her relative obscurity elsewhere, she’s won every congressional district in her state every time she’s run. So let’s hope she carries that right on through. Klobuchar has admitted she can be tough on people and that she has high expectations, especially for herself. Which is an excellent quality for a presidential candidate to have.

It’s the struggle every woman wakes up to every day in the U.S. and we might be tired, but we’re not done fighting.

In this video from The Guardian, Klobuchar turns the heat on Kavanaugh and then-nominee Attorney General William Barr.