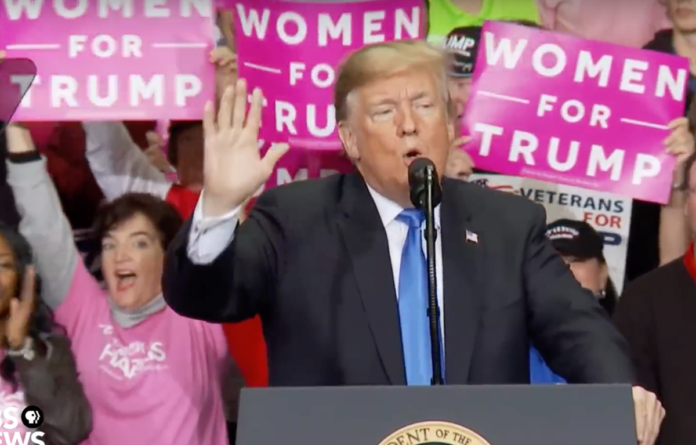 In a Twitter post, Chelsea Clinton pointed out that “counties that hosted a 2016 Trump rally saw a 226 percent increase in hate crimes,” including vandalism, intimidation, and assault. The findings were determined by analysis from the Washington Post.

Senator Tim Kain (D-Va.) criticized Trump for emboldening white nationalism around the world following a terrorist attack in New Zealand. The shooter referred to Trump as a “renewed symbol of white identity,” just one of many examples that white nationalists, some of whom become terrorists, see Trump as their champion.

The stunning results, as Clinton shared:

“We found that counties that had hosted a 2016 Trump campaign rally saw a 226 percent increase in reported hate crimes over comparable counties that did not host such a rally.”

It’s almost as if the president’s explosive rhetoric has explosive consequences https://t.co/eA7NwQOsm3

Although critics of the report may say the data could be exaggerated, the analysts note that hate crimes tend to be underreported, not overreported. For those who would say it can’t be proven that the hate crimes were inspired by Trump’s rhetoric, the Post notes “a considerable number of these reported hate crimes reference Trump.”

The findings coincide with the FBI’s 2017 Universal Crime report that stated hate crimes increased 17 percent over 2016.

Meanwhile, Trump downplayed the apparent rise in white nationalism following the New Zealand attack, saying “I think it’s a small group of people that have very, very serious problems, I guess.” The Democratic Coalition pointed out that once more, Trump is providing cover for the growing threat from white nationalists.

As he did after Charlottesville, Trump provides cover for white supremacists: "I don't really. I think it's a small group of people that have very, very serious problems, I guess," Trump said. #BigotPresidenthttps://t.co/OrfYDGsDwn

“Donald Trump did not create hate and racism and bigotry and anti-Semitism, but what he has done is poured fuel on a fire that is raging more than I’ve ever seen it in my lifetime. Hate crimes have gone up exponentially all across my state, all across the country because of what President Trump has unleashed,” said Gillibrand.

Trump has incited a rise in hate, but America is safer when we remember that love is what makes us strong.

“I will make sure that we remember we are at our best when we love one another, when we treat others the way we want to be treated, when we believe in the Golden Rule, and we care about the least among us,” she continued.

White supremacy and hate crimes are on the rise around the world. Donald Trump didn't create them, but he has poured gasoline on that fire, and his hate has made us all less safe. I refuse to let it go unchecked. I will stand up to him and I will fight for the best of our values. pic.twitter.com/zge8aa2gf6

Gillibrand’s voice joins a chorus of others who are calling for Trump to condemn hate crimes against minorities around the world. Instead, he appears ready to throw more fuel on the fires and pretend he doesn’t see the flames he started.

"Your words matter. Your policies matter … You should condemn this not only as a hate crime, but as a white supremacist terrorist attack … You need to condemn this community today." pic.twitter.com/xp6WjAbGs7