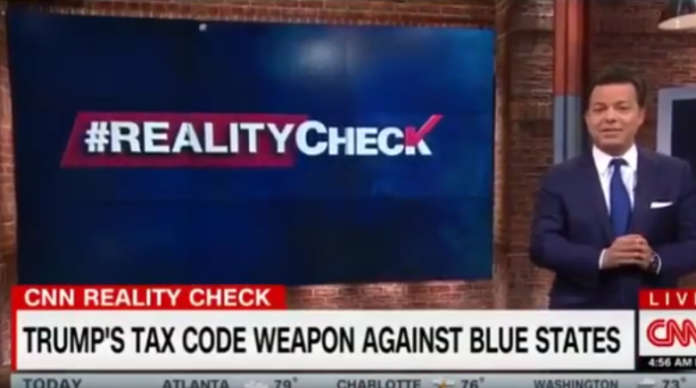 As tax season winds down this year, CNN analyst John Avlon took a look at how blue states and red states are faring under President Donald Trump’s tax law and found a disturbing pattern proving that Trump and Republicans are punishing blue states.

The fact is that Trump’s 2017 tax law that gave massive cuts to corporations and the wealthy is a failure that significantly harmed most American taxpayers. Even Trump supporters discovered that their tax refunds were far lower this year and that they could not deduct near as much as in years prior.

But Avlon reported on Friday that Trump’s tax law hits blue states much harder, making it appear that Trump weaponized the tax code to punish them.

Avlon then observed that Trump’s tax law is a “triple whammy” against blue states when it comes to home ownership.

“It’s no surprise in areas where most Americans live, it costs more to buy a house, and guess who is more likely to need a mortgage, again, red states deduct while blue states are stuck,” he said. “This has become known as the blue state triple whammy because Trump’s tax code has made it more expensive to buy a home, more expensive to own a home and harder to sell your home.”

“But guess who does even better under Trump’s tax code,” Avlon continued. “Trump’s own commercial real estate industry, the same industry which Jared Kushner’s company bought a white elephant of a building at a record price right before the market crashed and is still worth around $3 million and paid little or no federal income taxes for at least seven years.”

So, Trump and his family definitely benefited from his tax law even though he repeatedly claimed that it wouldn’t.

“President Nixon said ‘we can never make taxation popular, but we can make it fair,’” Avlon concluded. “With the politically weaponized tax code that punishes blue states, President Trump seems to have failed at both and that’s your reality check.”

“Whether you see your taxes go up or down will depend on whether you live in a red state or blue state and that’s by design,” explains @JohnAvlon in today’s #RealityCheck as he looks at how Trump has used the tax code to hurt Democratic states. pic.twitter.com/T6nbLenSqM

The tax code is not supposed to be a political weapon. When the IRS questioned the non-profit status of political groups tied to both parties not too long ago, Republicans threw a fit and tried to turn it into a big scandal by accusing the IRS of only targeting right-wing organizations. The resulting investigation debunked their claims, but Trump’s tax law is truly targeting blue states out of political revenge, yet Republicans are not complaining one iota.

Instead, they helped Trump pass it, thus being complicit in the scheme that is hurting millions of Americans just because most of those Americans did not vote for Trump in 2016.

It’s little wonder why Republicans are losing big in blue states, even losing every Republican House race in Orange County, California last year. And now that this report makes it clear Republicans are screwing them over on purpose, these states have even more reason to oust more Republicans in 2020 in their own version of political revenge on Election Day.