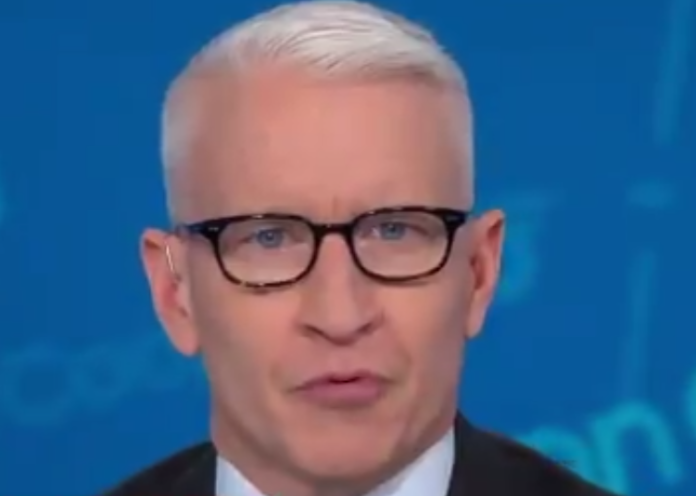 President Donald Trump claimed on Thursday that he couldn’t possibly have made an inappropriate promise to a foreign leader because he’s not “dumb enough” to do so. CNN host Anderson Cooper begs to differ.

A whistleblower came forward last month to report a disturbing phone call Trump made to a foreign leader in which he made an inappropriate promise, which NBC News reports potentially involves Ukraine, a nation Trump and his crony Rudy Giuliani have tried to pressure for assistance investigating former Vice-President Joe Biden.

This is a breach of national security so serious that the whistleblower, reportedly a Trump appointee, saw fit to report it to the Inspector General. Of course, Trump’s Director of National Intelligence refuses to hand over the complaint to Congress as required by law.

Trump reacted by taking to Twitter to whine as usual, but also made quite a claim about himself and his intelligence.

….Knowing all of this, is anybody dumb enough to believe that I would say something inappropriate with a foreign leader while on such a potentially “heavily populated” call. I would only do what is right anyway, and only do good for the USA!

Trump’s claim that he isn’t “dumb enough” to make inappropriate promises to a foreign leader drew the attention of Cooper, who proceeded to provide examples of Trump being “dumb enough” during his show on Thursday night.

“Whether the president is in his own words, ‘dumb enough,’ that’s unclear,” he began. “But his larger denial would certainly be easier to swallow if it weren’t for some of what we know he has done when he’s not surrounded by witnesses.”

“We know that he did reveal classified information to Russia’s ambassador and foreign minister in a conversation we only learned about through Russian media,” Cooper explained. “We know on other occasions the president had spoken to Vladimir Putin without note-takers in the room, something no modern president has done before. We also know, in a story broken by CNN’s Jim Sciutto, that the U.S. intelligence has extracted a top Kremlin asset, in part reportedly out of concern the president might blow his cover. So there is that.”

Indeed, Trump gave up classified information to the Russians inside the Oval Office that had been gathered by Israeli intelligence, thus putting those operatives in jeopardy and demonstrating that he can’t be trusted with sensitive information.

Trump’s private conversations with Putin without note-takers calls into question just exactly what Trump is telling the Russian dictator behind closed doors. That question so deeply concerned the intelligence community that a top spy embedded close to Putin had to be extracted for fear that Trump would out him.

Clearly, Trump is “dumb enough,” but Cooper also pointed out that Trump is a known liar.

“There is also the broader question of whether you can take what the president says at face value,” he said. “He tells so many obvious and checkable untruths, including this…” He then cut to Trump claiming that he is “the most transparent president in history.”

Yeah, that’s not true either, especially since he’s blocking release of the whistleblower complaint that is supposed to be given to Congress by law.