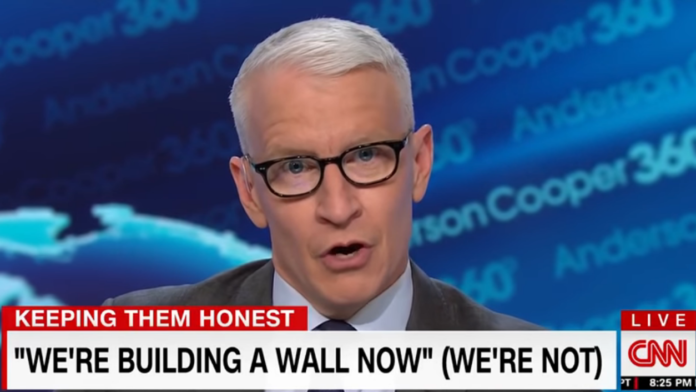 CNN host Anderson Cooper has had enough of President Donald Trump’s back and forth lying about needing billions of dollars for his border wall one day and then claiming the wall is already being built the next.

“We haven’t declared the national emergency yet, and yet we are building a lot of wall. We’re continuing to build a lot of wall, with, as you would say in business: cash on hand.”

That statement, Cooper noted on his show Friday evening, is complete nonsense:

“After two years in office and a 35-day government shutdown the president said he might declare an emergency to make something happen that he says is already happening.”

Next, Cooper laid a brutal fact-check on the president, noting that only Congress can appropriate funds for construction of a wall, and they haven’t done so:

“Two months ago he said he just awarded a contract for 115 miles of wall. Today, he said he was using cash on hand to fund the wall. broadly speaking only Congress can appropriate money.”

But what the CNN host said near the end of his “Keeping them honest” segment perfectly captured the true essence of Donald Trump; a child who plays games and pretends things are the way he imagines them to be:

“What the president seems to be doing now is re-imagining stuff that isn’t really what he wanted as something that he’s actually wanted all along. Which is fine if you say you wanted a pony for Christmas but you got a hobby horse instead. Make believe is fine if you’re a kid or a real estate developer in New York. It’s different when you’re a president.”

Trump’s billion dollar fantasies led to him go bankrupt six times. Now he wants to use our money to satisfy his own vanity and ego. What he needs to do is get someone to build a model of the wall on the border and pretend it’s there. Then maybe he can actually try to address the real problems facing this country.