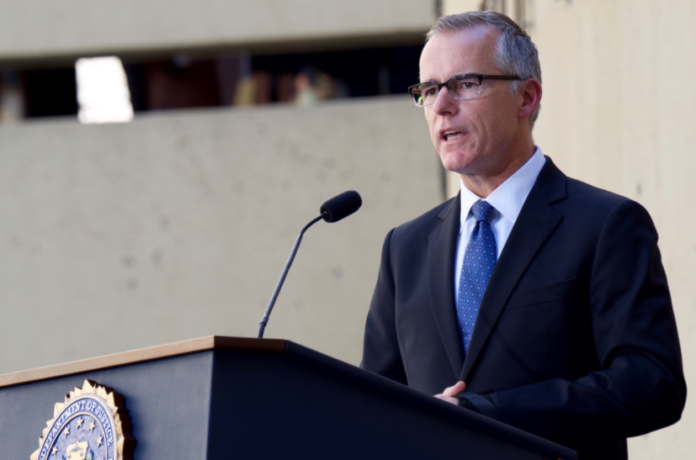 After months of attacking Sessions and Justice Department Inspector General Michael Horowitz, the pair reached the conclusion Trump desired and recommended terminating McCabe after 21 years of service to this country.

Sessions says the “reports concluded that Mr. McCabe had made an unauthorized disclosure to the news media and lacked candor − including under oath − on multiple occasions.”

McCabe could now lose a significant part of his pension, and Trump couldn’t stop himself from bragging about it on Twitter.

Andrew McCabe FIRED, a great day for the hard working men and women of the FBI – A great day for Democracy. Sanctimonious James Comey was his boss and made McCabe look like a choirboy. He knew all about the lies and corruption going on at the highest levels of the FBI!

In response, McCabe issued a statement of his own disputing the conclusion, and made it clear that he is done remaining silent:

For the last year and a half, my family and I have been the targets of an unrelenting assault on our reputation and my service to this country. Articles too numerous to count have leveled every sort of false, defamatory and degrading allegation against us. The President’s tweets have amplified and exacerbated it all. He called for my firing. He called for me to be stripped of my pension after more than 20 years of service. And all along we have said nothing, never wanting to distract from the mission of the FBI by addressing the lies told and repeated about us.

McCabe raised suspicions about the timing of his firing, which came after the House Intelligence Committee “revealed that I would corroborate former Director Comey’s accounts of his discussions with the President.”

After being fired by Trump last year, Comey revealed that Trump had asked him to drop an investigation against disgraced former National Security Adviser Michael Flynn, but refused to do it despite Trump demanding “loyalty.”

“This attack on my credibility is one part of a larger effort not just to slander me personally, but to taint the FBI, law enforcement, and intelligence professionals more generally,” McCabe continued. “It is part of this Administration’s ongoing war on the FBI and the efforts of the Special Counsel investigation, which continue to this day. Their persistence in this campaign only highlights the importance of the Special Counsel’s work.”

Indeed, Republicans on the House Intelligence Committee have joined Trump in his war against the Justice Department and FBI, going so far as to release a misleading memo accusing both of inappropriately obtaining a FISA warrant, and recently ended their Russia probe despite an “abundance of evidence” against Trump.

But McCabe wasn’t done. He went on to explain why Trump has singled him out for attack all these months:

“Here is the reality: I am being singled out and treated this way because of the role I played, the actions I took, and the events I witnessed in the aftermath of the firing of James Comey. The OIG’s focus on me and this report became a part of an unprecedented effort by the Administration, driven by the President himself, to remove me from my position, destroy my reputation, and possibly strip me of a pension that I worked 21 years to earn. The accelerated release of the report, and the punitive actions taken in response, make sense only when viewed through this lens.”

Based on McCabe’s statement, it appears that his firing is more about a pre-emptive strike by the administration to hurt McCabe’s credibility than it is about anything he allegedly did wrong.

McCabe insists that he followed procedure when he spoke to a reporter about his supervision of the investigations into former Secretary of State Hillary Clinton in 2016 and even made efforts to correct investigators if they misunderstood his answers during the inquiry.

And given the fact that Trump is currently on a firing spree, Sessions and Horowitz may have been particularly motivated to make Trump happy by ending McCabe’s career by any means necessary in order to save their own jobs.

And now McCabe is motivated to fight back, both for his pension and integrity, which means he could file a lawsuit and has even more reason to testify as part of the Russia investigation. Special Counsel Robert Mueller is probably very interested in what McCabe has to say.