The United States Blues
Home National News Andrew McCabe tells ‘The View’ Trump and his cronies operate like the... 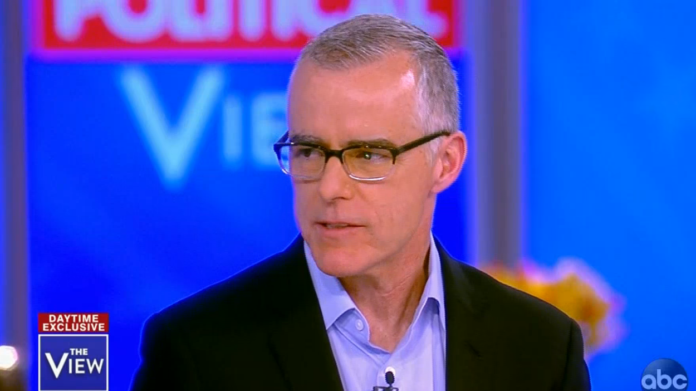 Former FBI deputy director Andrew McCabe was a guest on “The View” Tuesday, and he compared President Donald Trump and many of his associates to the Russian mafia.

McCabe was asked by co-host Ana Navarro about his new book, The Threat, in which he compares Trump to a Russian mob boss. McCabe, who spent part of his FBI career investigating Russian organized crime, told Navarro:

“I was experiencing some of the same things in the Oval Office I’d seen happen on the streets. I’d seen the relationship between the leader of the organization and those around him who carry out the rules.”

Then McCabe got to the specifics of why he had just made the comparison:

“I saw that almost obsessive fixation on the idea of loyalty. ‘Are you with us or against us? Are you on our team or on the other side?'”

Indeed, Donald Trump often tries to paint some people as being on the other team, or not having the proper loyalty to him. He even request that former FBI Director James Comey pledge loyalty to him and end an investigation into then-National Security Adviser Michael Flynn. When Comey refused, Trump summarily dismissed him.

Trump also had McCabe fired from the FBI just a day before he was eligible to receive his pension, an act that reeks of retribution and payback often seen in organized crime.

There can no longer be any doubt that Donald Trump is trying to operate his presidency like a criminal enterprise. Our only hope is that people like Andrew McCabe will continue to speak out and tell what they know.