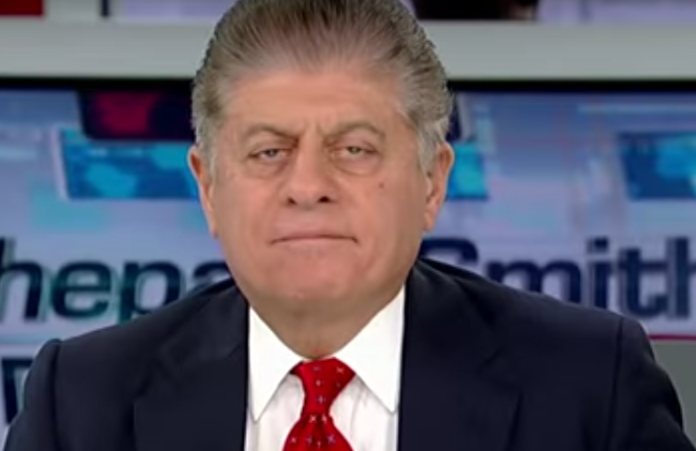 Fox News legal analyst Andrew Napolitano has been the bearer of bad news at his network since President Donald Trump ousted Attorney General Jeff Sessions and replaced him with a mere staffer as Acting Attorney General.

Trump shockingly made the move in what appears to be a blatant effort to undermine Deputy Attorney General Rod Rosenstein and Special Counsel Robert Mueller, whose report on the Russia investigation has been expected to drop any time.

But if Trump and his Acting Attorney General Matthew Whitaker have their way, the report will be buried and the investigation disbanded.

Not long after the news, Fox anchor Shep Smith turned to Napolitano for his take, and it’s not what Trump wants to hear.

“Under the law, the person running the Department of Justice must have been approved by the United States Senate for some previous position, even on an interim post,” Napolitano said.

“He was not confirmed by the United States Senate for a leadership position at the Justice Department,” he continued, noting that Deputy Attorney General Rod Rosenstein is next in line because he has been confirmed by the Senate.

Napolitano also warned that Trump could be opening himself up to obstruction of justice charges, which Whitaker could be considered complicit with if he interferes with the probe.

“The President can fire an attorney general for almost any reason,” Napolitano said. “He cannot fire him if the purpose is to shake up the leadership of the Justice Department in order to interfere with a criminal investigation that The President wants to interfere with. If that’s the reason for which Mr. Whitaker is now the acting Attorney General of the United States, Mr. Whitaker himself could be in the crosshairs of Bob Mueller.”

On Thursday morning, the hosts of Fox & Friends were fishing for a different response from Napolitano, but he disappointed them by informing them and viewers that Whitaker is not qualified to be the Acting Attorney General.

“You’re saying the guy the president appointed is not qualified?” host Steve Doocy asked as if hoping for a different answer …

“Is not legally qualified,” Napolitano replied.

“The President’s got lawyers!” Doocy said in an effort to defend Trump. “They looked at that!”

“He has chosen someone who, under the law, does not qualify to be Acting Attorney General,” Napolitano said before going on to confirm that Whitaker is not really the Attorney General and that he did not even take the oath of office.

Fox’s Andrew Napolitano: Trump “has chosen someone who does not qualify under the law to be the Acting Attorney General of the United States.” pic.twitter.com/gFKQBDy0vg

Fox News’ top legal expert just poured cold water all over Trump’s appointment of Whitaker two days in a row. Clearly, if even Napolitano is this critical, what Trump did must truly be bad.