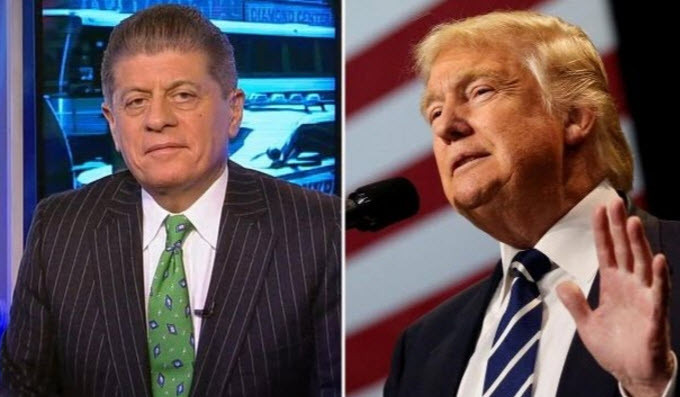 Nearly two weeks ago, Trump told four Democratic congresswomen of color to “go back” to the countries they came from, never mind that fact that all four are American citizens and three of the four were actually born here.

Trump’s remarks have incited hatred against these lawmakers and other people of color ever since, especially those who criticize Trump or seek to fix the systemic racism and inequality that poisons our country.

To Trump supporters, any effort to fix these problems or any opposition to Trump’s destructive agenda is unpatriotic, which has given rise to the “love it or leave it” phrase that even a pastor placed on a church sign in Virginia, resulting in the entire congregation walking out in protest.

“The phrase itself – with its command of the government’s way or the highway – admits no dissenting opinions, suggests that all is well and proper here, and insinuates that moral norms and cultural values cannot be improved. The phrase itself is un-American,” Napolitano wrote in his op-ed.

“When he loudly called for four members of Congress – women of color who oppose nearly all his initiatives and who have questioned his fitness for office – to go back to the places from which they came, he unleashed a torrent of hatred,” he continued.

“”Go back” is a rejection of the nation as a melting pot; a condemnation of one of America’s founding values – E Pluribus Unum (Out of many, one),” he explained. “It implicates a racial or nativist superiority: We were here before you; this is our land, not yours; get out. Nativist hatred is an implication of moral or even legal superiority that has no constitutional justification in American government.”

Napolitano then warned that Trump’s effort to divide Americans by inciting hatred of certain groups of people is sending our nation down a dangerous path and called for American to reject it.

“When the president defies these moral and constitutional norms and tells women of color to “Go back,” he raises a terrifying specter,” he concluded. “The specter is hatred not for ideas he despises but for the people who embrace those ideas. The specter is also a dog whistle to groups around the country that hatred is back in fashion and is acceptable to articulate publicly…It must be rejected loudly in all its forms – especially when it comes from the president.”

Napolitano has known Trump for over 30 years and had been one of his biggest supporters on Fox News, so his criticism of Trump’s hate and racism is notable.