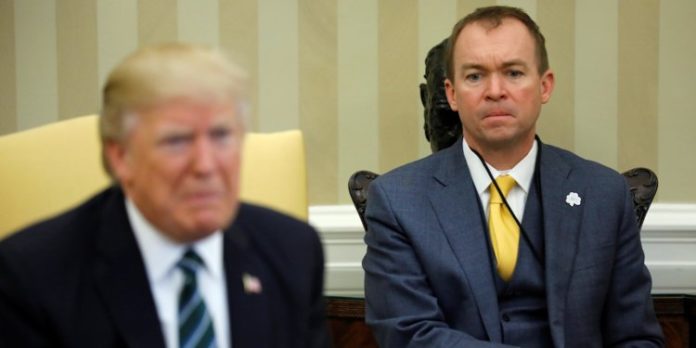 Even though he hasn’t formally begun his duties as the acting chief of staff for President Donald Trump, Mick Mulvaney may well have the shortest tenure in the history of the White House.

The Daily Beast is reporting that Trump is already second-guessing naming Mulvaney to replace John Kelly as chief of staff at the end of December. The reason? Comments Mulvaney made in 2016 about Trump:

“Donald Trump is reportedly already turning on Mick Mulvaney—who hasn’t even started his new job as acting White House chief of staff yet—due to a two-year-old video uncovered by The Daily Beast, which shows Mulvaney calling the president ‘a terrible human being.'”

The president was said to be “furious” when he heard about Mulvaney’s remarks. Specifically, Mulvaney said neither Trump or Democratic nominee Hillary Clinton could “be a role model for my 16-year-old triplets.” Mulvaney added:

“In an ordinary universe, would both of these people’s past activities disqualify them from serving for office? Yes.

“Did you know [Mulvaney] called me ‘a terrible human being’ back during the campaign?”

But even if Trump does want to give Mulvaney the boot before he formally takes over, a replacement won’t be easy to find. Numerous candidates dropped out of the running when asked to serve as chief of staff, and with the administration in utter chaos in recent days, it seems unlikely that a suitable person would be accept what may well be the most thankless job in Washington.

For his part, staffers with the Mulvaney camp tried to downplay the the controversy, saying it’s “old news” and that Mulvaney changed his mind about Trump not long after meeting him.

But Donald Trump is a thin-skinned man who holds grudges, and he could well decide that he cannot get past Mulvaney’s slight against him. If so, it could be months before another chief of staff is named.