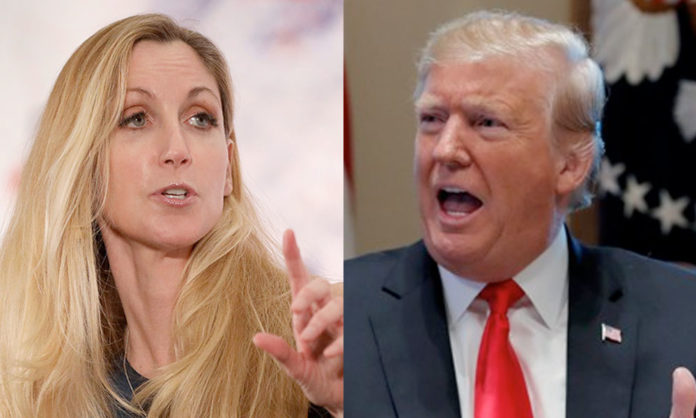 There was a time when right-wing pundit Ann Coulter was one of the biggest supporters of President Donald Trump on the planet, even going to far as to write a book in 2016 which she proudly titled In Trump We Trust.

Now, however, Coulter is not happy with Trump’s failure to keep his promise about building a wall on the Southern border and making Mexico pay for it. (Yes, she actually bought that line.)

On Monday, Coulter fired off a tweet suggesting that Trump and his company should be criminally charged for hiring undocumented workers:

Yes, why WON’T authorities charge the employers using all the illegal alien workers?

ANSWER: BOTH REPUBLICANS AND DEMOCRATS SUCK UP TO EMPLOYERS FOR THEIR CAMPAIGN DONATIONS. https://t.co/z15zV8UsUd

Newsweek reports that the article Coulter referenced has special significance for the conservative commentator:

The article re-tweeted by Coulter was titled “Another Trump double standard hurting the poor and minorities.” In the op-ed, the Post‘s opinion editor James Downie detailed how the Trump administration has neglected to go after employers for hiring undocumented workers, choosing instead to largely just punish the migrants. Downie also pointed out that reporting by the Post has shown that the president’s company, The Trump Organization, has employed undocumented individuals at several of its properties.

“It’s worth noting that this discrepancy in enforcement is a policy change under the Trump administration. Before President Barack Obama’s first term was over, his administration had already accumulated more audits and penalties on employers than were imposed during both terms of of the George W. Bush administration,” Downie wrote.

“Funny how employer audits almost completely dried up after a president whose companies employ undocumented immigrants entered office,” he pointed out.

Of course, that’s the essence of Donald Trump: A hypocrite who thinks the law applies to everyone but himself. He’s above the law in his own demented mind.

Just last week, the Post reported that eight of Trump’s properties have repeatedly hired numerous undocumented workers. And yet according to the president, immigrants are invading the United States. Apparently, it’s not an “invasion” if they’re helping make a buck for the Donald.

Just last week, ICE raided several chicken processing plants in Mississippi that allegedly employed undocumented employees. Nearly 700 workers were taken into custody, but none of the businesses were charged or fined for hiring them.

Coulter is a disgusting right-wing ideologue who is almost as racist and bigoted as Trump. But she’s right about one thing: The law should be applied to everyone equally. If not, then it shouldn’t be applied to anyone.