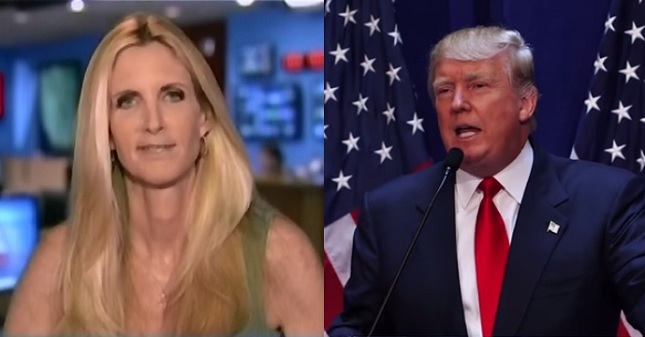 Right-wing author and commentator Ann Coulter was an early and enthusiastic supporter of Donald Trump, but now she says she’s ready to toss him overboard.

Appearing at Columbia University Tuesday evening for a discussion of immigration policy in the U.S., Coulter slammed President Trump for signing the $1.3 billion omnibus spending bill last week even though it didn’t contain any money for his oft-repeated pledge to build a wall on the border with Mexico:

“It kind of breaks my heart. He’s not giving us what he promised at every single campaign stop.”

Coulter even admitted that she had made a mistake by supporting and voting for Trump:

“I knew he was a shallow, lazy ignoramus, and I didn’t care.”

So why vote for someone who exhibits ignorance and sloth? Coulter tried to justify her decision:

“We had 16 lunatics being chased by men with nets running for president—and Trump. So of course I had to be pedal-to-the-metal for Donald Trump. I’d been waiting 30 years for someone to say all these things. I went into this completely clear-eyed.”

When Coulter finally focused long enough to explain her position on immigration, she was her usual offensive self, drawing hearty boos when she remarked:

“We are bringing in immigrants who are good for the very rich. They don’t live in their neighborhoods. They don’t fill up their schools or their hospital emergency rooms. And, oh boy, you should see how clean Juanita gets the bathtub. You can eat off of it after she’s done.”

How disappointed in Trump is Coulter? Enough that she said if Ohio Democratic Senator Sherrod Brown runs for president in 2020, she might just vote for him:

If indeed Trump has lost one of his most vocal cheerleaders on the far right, what does that say about his chances in 2020? Some Republicans are already hinting they may oppose him in the GOP primaries, and that could weaken Trump for the general election.

One thing seems certain: If as little as 10 percent of Trump’s political base turns their backs on him the way Coulter has, he’s done for.