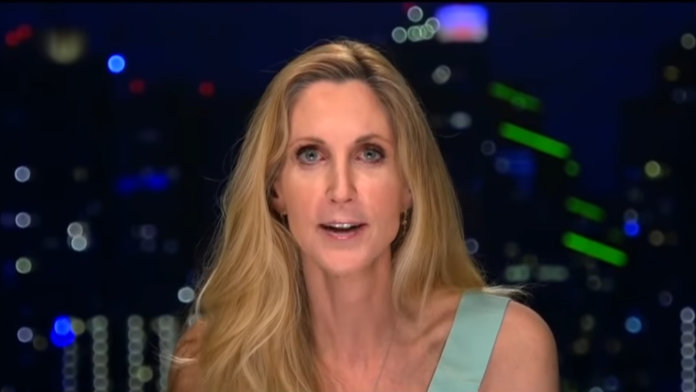 Right-wing author/commentator Ann Coulter believes the only way to solve the question of immigration is to invade our neighbor to the south, Mexico.

During an appearance on the Fox News show hosted by Jeanine Pirro Saturday evening, Coulter railed that it was important to reform immigration immediately because Hispanic immigrants who become American citizens will vote for Democrats. That alone, Coulter declared, is reason enough to send U.S. troops into Mexico to “stop” all immigrants.

When Coulter made her insane suggestion, even Pirro seemed nonplussed, noting that the law specifically prohibits troops from firing on civilians. To that, Coulter replied:

“You can’t shoot Americans, you can shoot invaders. Even if that were true, okay, so go one yard into Mexico.

“Reagan invaded in Grenada and Grenada was far less of a threat to Americans than what’s happening on our border.”

What in the hell did she just say?!

Coulter’s comments come on the heels of Trump’s ramping up of the rhetoric as it pertains to the immigrant caravan from South America which is filled with people seeking asylum in the United States. Both U.S. and international law say immigrants have every right to seek asylum. Despite this, Trump has been threatening to shut down the border:

Migrants at the Southern Border will not be allowed into the United States until their claims are individually approved in court. We only will allow those who come into our Country legally. Other than that our very strong policy is Catch and Detain. No “Releasing” into the U.S…

….All will stay in Mexico. If for any reason it becomes necessary, we will CLOSE our Southern Border. There is no way that the United States will, after decades of abuse, put up with this costly and dangerous situation anymore!

On Saturday, the administration said the incoming Mexican government had agreed to hold all immigrants seeking asylum in Mexico until their cases could be heard in American courts. The Mexicans later humiliated Trump by revealing they had never made such a promise to the White House.

And now we have calls for the invasion of Mexico from dullards like Ann Coulter. Sounds like what this country really needs is to deport extremists like Coulter and replace them with people who are tolerant of others.