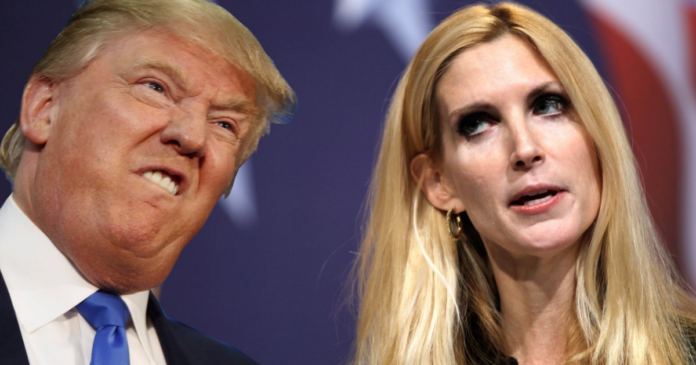 Right-wing provocateur Ann Coulter was one of Donald Trump’s earliest and most ardent supporters, practically swooning over Trump’s proposal to build a wall on the Southern border and somehow make Mexico pay for it.

Oh, how times have changed!

Coulter is now saying that Trump was lying all along about building the wall and predicting he won’t serve out the remainder of his term in office.

Speaking to the conservative website The Daily Caller, Coulter lambasted the president, saying his willingness to capitulate to Congressional Democrats and not shut down the federal government until funds are appropriated for the wall proves he was never serious in the first place and was just conning voters:

“They’re about to have a country where no Republican will ever be elected president again. Trump will just have been a joke presidency who scammed the American people, amused the populists for a while, but he’ll have no legacy whatsoever.”

Does that mean Coulter won’t support Trump when he runs for re-election in 2020? To that, she replied emphatically:

“No. Nor will, I think, most of his supporters. Why would you? To make sure, I don’t know, Ivanka and Jared can make money? That seems to be the main point of the presidency at this point.”

Coulter also expressed her disgust with Trump on Twitter:

Someone tell Tucker’s producers about Trump betraying voters on the wall! He missed that story yesterday. At least the Russia story is something new & exciting. https://t.co/Vn7LivhZgI

Oh, Ann! How does it feel to know you were conned by a liar who’s been a con man his entire life?