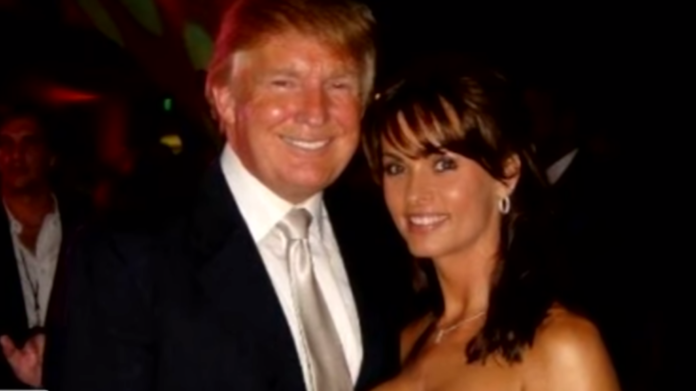 In 2006, just two years after he married Melania — who had just given birth to their son, Barron — Donald Trump filmed an episode of The Apprentice at the Playboy Mansion. While there, he met Karen McDougal, who had previously been Playmate of Year. They soon began an extramarital affair.

Trump was immediately attracted to McDougal, and he made no secret of his infatuation, according to a report in The New Yorker:

“Trump seemed uninhibited by his new family obligations. McDougal later wrote that Trump ‘immediately took a liking to me, kept talking to me – telling me how beautiful I was, etc. It was so obvious that a Playmate Promotions exec said, ‘Wow, he was all over you – I think you could be his next wife.'”

Shortly after that initial meeting, Trump and McDougal began a nine-month long affair. When the relationship ended, McDougal was offered $150,000 by American Media, Inc., which publishes the National Enquirer, for exclusive rights to the story. That story never ran, and McDougal said she wishes she had never accepted the deal:

“It took my rights away. At this point I feel I can’t talk about anything without getting into trouble, because I don’t know what I’m allowed to talk about. I’m afraid to even mention his name.”

McDougal also alleges that Trump offered her money the first time they slept together, writing in a letter to a close friend:

“‘I was so nervous! I was into his intelligence + charm. Such a polite man. We talked for a couple hours – then, it was “ON’! We got naked + had sex.’ As McDougal was getting dressed to leave, Trump did something that surprised her. ‘He offered me money,’ she wrote. ‘I looked at him (+ felt sad) + said, No thanks – I’m not that girl. I slept w/you because I like you – NOT for money’ – He told me ‘you are special.'”

Asked for comment on the story, a White House spokesperson fell back on a familiar Trump phrase to dismiss the allegations:

“This is an old story that is just more fake news. The President says he never had a relationship with McDougal.”