The United States Blues
Home News Anthony Scaramucci whines that both parties need to be a lot nicer... 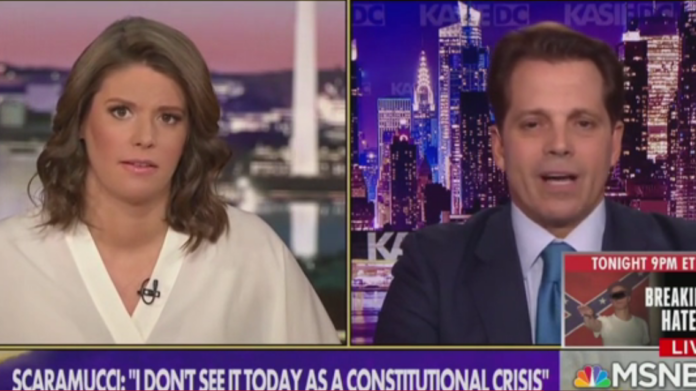 Anthony Scaramucci, who was White House Director of Communications for all of 10 days, was a guest on MSNBC Sunday evening, and his main message was that Democrats and Republicans in Congress need to be nicer to aides and staffers who work in the Trump administration.

Appearing on “Kasie DC,” Scaramucci said that even though President Donald Trump is refusing to led anyone from the White House testify before Congress, we aren’t facing a Constitutional crisis:

It doesn’t really matter what they’re using the power for, the bottom line is that they have the power!

Host Kasie Hunt then asked about a specific individual, Donald Trump Jr., who has been subpoenaed by the Senate Intelligence Committee, which is chaired by a Republican:

“What does he have to hide from the Senate intelligence committee?”

Scaramucci said he didn’t think Junior had anything to hide, adding:

“They’re drawing a line in the sand saying it’s an abuse of power. If he ultimately decides to comply you don’t have a constitutional crisis. I know right now the decision looks like he’s not going to. But that’s happened in the past when people say I’m not going to comply and then they show up. Sam Nunberg was an example of that, he said he wasn’t going to comply and then he shows up. I don’t like the weaponization of the powers of Congress.”

Most of all, Scaramucci declared, Congress just needs to tone down the rhetoric:

“But if I was a barred lawyer and I said, ‘Hey, I’m not coming to a subpoena,’ my guess is I would get disbarred or come close to getting disbarred unless I had some ridiculously substantial reason. I don’t like it, I would like both sides to dial it down.”

Yeah, if only everyone would just be as calm, cool, and collected as Donald Trump, right, Mooch?

Clearly caught off-guard by such a suggestion, Hunt could only reply:

“Who knew one day you were going to be on television telling us all to dial it down.”

Scaramucci is a joke. He’s become a caricature of an attorney and utterly absurd. No wonder he used to work in this dysfunctional administration.