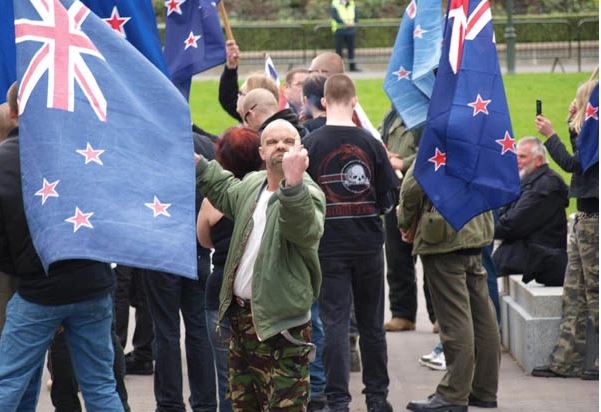 While President Donald Trump refused to condemn white supremacy in the wake of a terrorist attack against Muslims in New Zealand Friday, the Anti-Defamation League warned that white supremacy is an “international terror threat.”

As Muslims prayed at a mosque in Christchurch, New Zealand a white supremacist launched a terrorist attack, killing 49 people and wounding at least 20 others in what the country’s prime minister is calling an “unprecedented act of violence” in the nation’s history.

The perpetrator of the attack wrote an 87 page anti-immigrant and anti-Muslim manifesto that connects him with white nationalists and white supremacists.

In response, Trump extended support to New Zealand and condemned the attack, but stopped short of condemning white supremacy and the hate that led to the violence.

My warmest sympathy and best wishes goes out to the people of New Zealand after the horrible massacre in the Mosques. 49 innocent people have so senselessly died, with so many more seriously injured. The U.S. stands by New Zealand for anything we can do. God bless all!

Trump would follow that up by promoting a Jewish exodus from the Democratic Party as part of his attacks on Rep. Ilhan Omar (D-Minn.), a Muslim congresswoman who is falsely accused of anti-Semitism because she has merely criticized Israeli policies and questioned the pro-Israel lobby’s relationship with Congress.

The attacks on Omar and her faith have only worsened as Trump supporters incite violence against her while painting all Muslims as anti-Semitic.

On Friday, the Anti-Defamation League (ADL) stepped up to condemn white supremacy even as Trump refused to do so.

“This attack underscores a trend that ADL has been tracking: that modern white supremacy is an international threat that knows no borders, being exported and globalized like never before,” Anti-Defamation League CEO Jonathan Greenblatt said in a statement. “The hatred that led to violence in Pittsburgh and Charlottesville is finding new adherents around the world. Indeed, it appears that this attack was not just focused on New Zealand; it was intended to have a global impact.”

“We are devastated by the loss of life in Christchurch and mourn this tragedy with Muslims around the world,” Greenblatt continued. “No one should be targeted for their faith or their immigrant status, and it is unconscionable that the shooter singled out Muslims during their hours of prayer. We stand in solidarity with Muslims around the world and unequivocally condemn Islamophobia.”

Trump has spent much of his presidency cozying up to white nationalists, even hiring them as advisers and claiming that neo-Nazis are “very fine people” during the violence in Charlottesville in which a counterprotest was murdered.

Well, the NYPD is certainly taking the violence seriously by guarding NYC mosques against potential attacks as parishioners prayed for the victims of the massacre.

“We are immediately — the NYPD — is reinforcing Muslim community centers and mosques,” Mayor Bill DeBlasio said. “So you’ll see a lot of NYPD presence. Of course, folks will be going to pray today. We want them to be supported.”

Trump’s hateful and violent rhetoric is pushing white nationalists over the edge, and the violent attack follows Trump’s recent remarks threatening violence against his critics and political opponents by the police and the military during an interview with alt-right publication Breitbart.

This is why Trump is the top threat facing our country, and perhaps, the entire world.