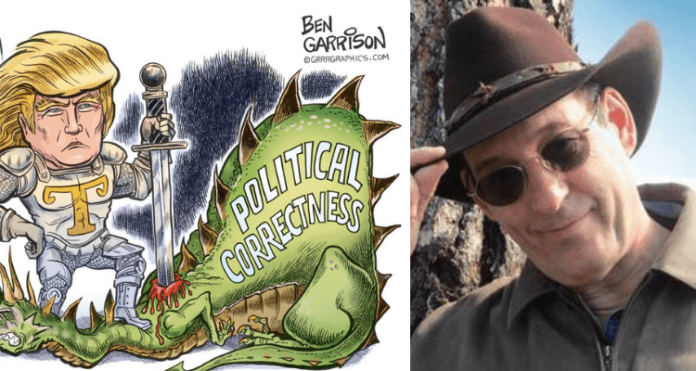 A cartoonist who has been accused of “blatant anti-Semitism” by the Anti-Defamation League (ADL), has been cordially invited to participate in a White House summit on social media by President Donald Trump.

Ben Garrison tweeted out his invitation from the president:

Honored to be invited to the White House! Thank You Mr. President! @realDonaldTrump #SocialMediaSummit pic.twitter.com/8b6zIa2XN3

Trump’s so-called “Social Media Summit” will reportedly address the president’s obsession with platforms which he claims discriminate against conservatives who spew threats and hate speech and then whine when they’re not allowed to spew out their filth without consequences.

Garrison, by the way, is one of those right-wing extremists who got into trouble when he posted a disgusting cartoon that suggested Jewish philanthropist George Soros was controlling former members of the Trump administration, HuffPost notes:

Two years ago, Garrison created an inflammatory cartoon depicting Jewish billionaire philanthropist George Soros using puppet strings to control then-Gen. H.R. McMaster, who was serving as Trump’s national security adviser at the time, and retired Gen. David Petraeus. The image was a nod to an anti-Semitic conspiracy theory that a secretive international Jewish cabal controls the world. In the cartoon, Soros is being controlled by a hand labeled the “Rothschilds,” a famous Jewish banking family.

The ADL wrote at the time that the “thrust of the cartoon is clear: McMaster is merely a puppet of a Jewish conspiracy.”

Man who drew a cartoon the @ADL calls “blatantly anti-Semitic” says he was invited to the White House for a social media summit https://t.co/Fzckv4rJbD https://t.co/nmH1zyCV7C pic.twitter.com/hvz4BpLNVt

When pressed on why he drew such a cartoon, Garrison revealed that he had done so at the behest of Mike Cernovich, a well-known right-wing extremist who traffics in bizarre, unsubstantiated conspiracy theories about a “deep state” attempt to take down the Trump presidency. According to the Southern Poverty Law Center, Cernovich is a ” misogynistic white nationalist, (who) promulgated the ‘Pizzagate’ conspiracy theory that Hillary Clinton and other prominent Democrats were running a child sex trafficking ring from a Washington pizzeria.”

The ADL has called Garrison an artist “known for cartoons with right-wing, anti-government and conspiratorial themes.”

No wonder Trump is so fond of Garrison. He’s almost as unhinged and disgusting as the Conspiracy Theorist-in-Chief.