The United States Blues
Home National News Anti-vaccination protesters are now equating themselves with the civil rights activists of... 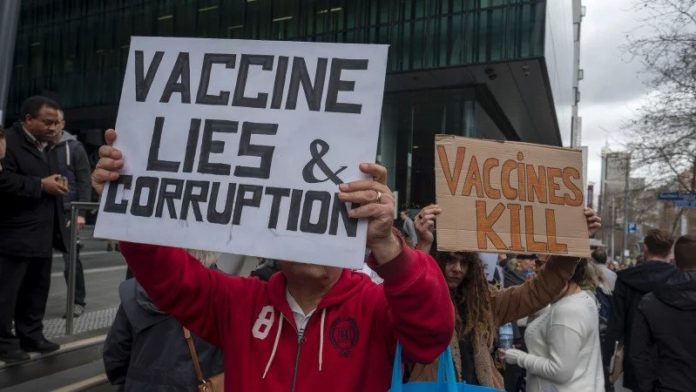 Anti-vaccination protesters in California say they’re the modern-day equivalent of the civil rights pioneers who protested segregation in the 1960s, and they’re trying to claim the mantle of actual heroes in order to get their radical agenda accepted, Politico notes in a disturbing new report:

A chorus of mostly white women sang the gospel song “We Shall Overcome” in the California State Capitol, an anthem of the civil rights movement. Mothers rallied outside the governor’s office and marched through Capitol corridors chanting “No segregation, no discrimination, yes on education for all!” Some wore T-shirts that read “Freedom Keepers.”

But this wasn’t about racial equality. In the nation’s most diverse state, protesters opposed to childhood vaccine mandates — many from affluent coastal areas — had co-opted the civil rights mantle from the 1960s, insisting that their plight is comparable to what African Americans have suffered from segregationist policies.

Such claims don’t sit well with lawmakers in the Golden State, especially those that represent minority communities. Assemblywoman Sydney Kamlager-Dove (D-Los Angeles) said the anti-vaxxers need to stop twisting history for their own purposes:

“This is a misappropriation of a movement that really is not over and proves to be challenging to overcome. The whole conversation around vaccinations is actually one about privilege and opportunity. It’s a personal choice. It’s a luxury to be able to have a conversation about medical exemptions and about whether or not you think your child should be vaccinated.”

Protests have increased in recent weeks in response to a proposed law which would eliminate many of the current medical exemptions for childhood vaccinations for children in California. Four years ago, the state eliminated all personal belief and religious exemptions, the most common reasons cited by parents who don’t want to immunize their children but still insist on enrolling them in public schools.

The impetus for eliminating all exemptions is clear: An increase in outbreaks of diseases such as measles across the nation:

A handful of doctors sympathetic to their beliefs had been providing waivers that allowed parents to keep their kids unvaccinated, including Robert Sears, a member of the famed Sears medical family that had dispensed pediatric advice to parents for decades.

And while those in the anti-vaccine moment claim their ranks are diverse, the facts suggest otherwise:

The 50 public schools with the lowest kindergarten vaccination rates in the state — all less than 50 percent — are disproportionately white, according to an analysis by POLITICO. While less than 25 percent of California public school students are white, an average of 55 percent of students are white across the state’s 50 least vaccinated campuses.

Additionally, the rhetoric being used by those opposed to mandatory vaccinations has grown increasingly ugly, with anti-vaccine groups suggesting that California Governor Gavin Newsom (D) the same as former Alabama Governor George Wallace, who fought against ending segregation in his state. After legislation regarding vaccinations passed and were signed by Newsom, some protesters held signs that read “Welcome to Nazifornia.”

If anti-vaccination supporters continue to insist that their children should not be required to receive immunizations that protect all of us, then perhaps they should resort to homeschooling as a better form of protest. They have no right to endanger the health of others with their stance.