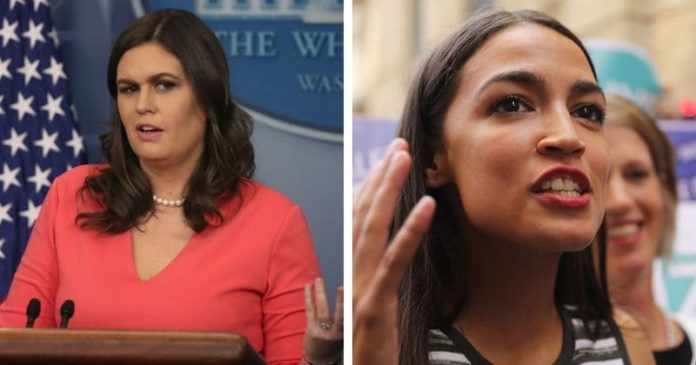 Tuesday evening, White House Press Secretary Sarah Sanders went on “Hannity” and decided she’d dis New York Democratic Congresswoman Alexandria Ocasio-Cortez, telling Sean Hannity the administration wasn’t paying much attention to comments Ocasio-Cortez had made that “the world is going to end in 12 years if we don’t address climate change.” With a smirk on her face, Sanders snidely commented:

“I don’t think we’re going to listen to her on much of anything, particularly not on matters that … we’re going to leave into the hands of a much, much higher authority and certainly not listen to the freshman congresswoman on when the world may end.”

Yep, Ms. Sanders decided to play the god card. But she probably wasn’t expecting the slapdown Ocasio-Cortez laid on her via Twitter. And best of all, the congresswoman did it by quoting the Bible to the sanctimonious press secretary:

“Genesis 1: God looked on the world & called it good not once, not twice, but seven times.

Genesis 2: God commands all people to “serve and protect” creation.

Leviticus: God mandates that not only the people, but the land that sustains them, shall be respected.” https://t.co/AhWd3vuVBd

You shouldn’t need a Bible to tell you to protect our planet, but it does anyway.

No, you certainly shouldn’t need a Bible to tell you to protect the planet, but fake Christians like Sanders and her boss, President Donald Trump, are fond of using the Bible to justify their craven words and deeds. Problem is, they do so selectively, overlooking passages that speak directly to what blatant hypocrites they are.

Ocasio-Cortez got plenty of applause from others on social media:

By their own logic, shouldn’t God protect the border then? We shouldn’t need a wall.

Well done! …Using their favorite source to point out a few pesky details.

When you commit a sin, they use the Old Testament bible quotes. When they commit a sin, only then do they know the New Testament. You know, asking for forgiveness and Jesus loves, turn the other cheek, etc.

And while we’re at it, perhaps it’s time we put Sarah Sanders and the entire White House on notice: We’ve never listened to any of you on much of anything because you don’t have anything valuable to say.