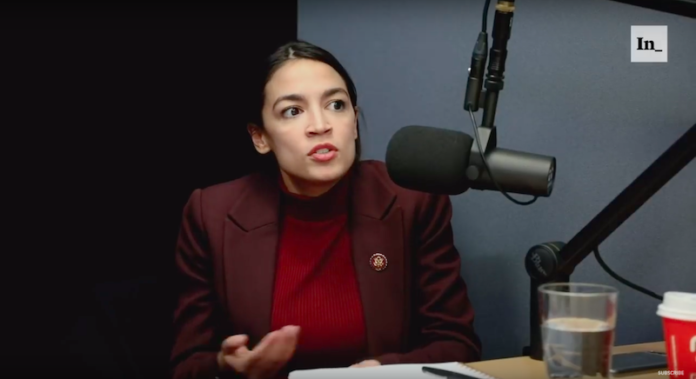 In a massive push for her progressive agenda, freshman House representative Alexandria Ocasio-Cortez has unveiled a framework for legislation on what legislators have dubbed “The Green New Deal” (GND). AOC has been adamant about including the planet’s impending climate crisis into considerations for House legislation. She even challenged now-House Speaker Nancy Pelosi by speaking at a protest for climate change shortly prior to her swearing-in ceremony. However, it’s easy to see why AOC has prioritized climate change, with climate change reports like a recent UN one stoking the fires of panic. It details the harm of man-made climate change a near-apocalyptic scale. According to a new report from NPR, AOC wants to do something about it. And outline of the GND, released in concert with Sen. Ed Markey, a Democratic colleague from Massachusetts, tells us what.

“Thursday they are introducing a framework defining what they call a ‘Green New Deal’ — what they foresee as a massive policy package that would remake the U.S. economy and, they hope, eliminate all U.S. carbon emissions.”

The elimination of all U.S. carbon emissions sounds like a lofty goal, but the GND doesn’t stop there. In short, it’s a grand look at the scope of carbon emissions in America across multiple fields — electricity generation, transportation, and agriculture. The important thing to remember about the framework is that it is non-binding, which means that it won’t create any of these new programs. But House Democrats like AOC seem convinced that sustained discussion on the environment and our impact on it can lead to legislation with more teeth. The GND gets its namesake from Franklin D. Roosevelt’s “New Deal,” a series of programs and projects instituted during the Great Depression, meant to restore prosperity to Americans. The wording makes the package a little hard to swallow, as during the Roosevelt administration, “restoring prosperity to Americans” did not always mean all kinds of Americans. So while older white Americans are likely to remember the political genius of FDR, black Americans are more likely to remember the ways they were excluded from the abundance that followed the chaos of the 1930s. A possible critique of House Democrats with this bill, is that they are playing the president’s “Make America Great Again” game, inculcating their base with the idea that a bygone era holds the keys to America’s survival (and especially while forgetting the sacrifices and injustices of that era.) However, the name could also be seen as Democrats extending an olive branch to conservatives who charge that they fail to cherish America’s accomplishments as much as they should. However, AOC’s star is rising within the House, with some even talking about a presidential run someday. For now, AOC seems content to remain in the House and continue to force the issue of climate change and of our planet’s continued livability. Feature image provided via Youtube screenshot