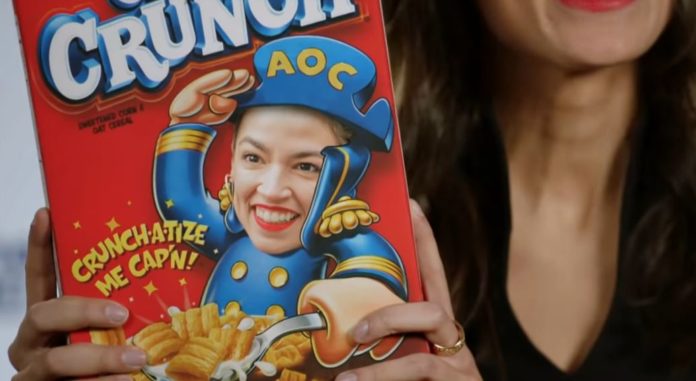 Say what you want about Rep. Alexandria Ocasio-Cortez (D-N.Y.), also known as AOC, you can’t deny that she has an infectious personality that makes her very relatable whenever she appears on television. Her Wednesday night appearance on The Late Show with Stephen Colbert was no different.

“One of the biggest names in politics is Congresswoman Alexandria Ocasio-Cortez,” Colbert began before poking fun at the length of her name, a name that Fox News often refuses to say correctly.

Speaking of Fox News, Colbert pointed out that the network is obsessed with Ocasio-Cortez before showing clips of various hosts fear mongering about her.

That led to yet another edition of “Just One Question,” a segment in which “Late Show” staffers and special guests ask questions for the star to answer, which usually ends up being more hilarious as the segment goes on.

This time, Ocasio-Cortez sat in the chair to field questions.

When asked what the most surprising thing about Washington is, the freshman lawmaker said: “I think how little it takes to shake things up a lot.”

AOC has certainly done that by doing her homework for every committee hearing where she has asked very good questions to expose corruption in government and corporations, including her brilliant grilling of President Donald Trump’s attorney Michael Cohen, who implicated Trump in tax evasion and insurance fraud because of her questions, which laid out the case for obtaining Trump’s tax returns.

After being asked what she would do to change Washington, AOC gave a lighter answer by saying she wants “everyone to relax a little bit more.”

She then quipped that being the youngest lawmaker in Congress is “lonely” because “nobody knows who Drake is.”

Asked how Medicare-for-All would work, AOC simply answered that Medicare would apply to everybody.

And then surprise guest Molly Ringwald, who starred in ‘The Breakfast Club,’ asked AOC about where she got her dance moves, and she hilariously responded “I saw it in this old movie called ‘The Breakfast Club.’ It’s pretty old. I’m actually pretty surprised it was in color.”

The final question of what she has in common with Senate Majority Leader Mitch McConnell (R-Ky.) also resulted in a funny answer, which you can watch below in the full video via YouTube.