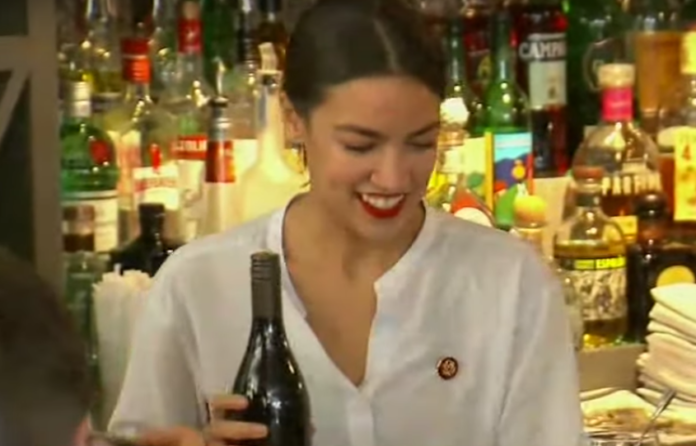 Rep. Alexandria Ocasio-Cortez (D-N.Y.) put her skills as a bartender to good use on Friday as she waited tables and made drinks for customers at a bar in Queens while speaking to them about the fight for paying fair wages.

The struggle to raise the minimum wage to $15 an hour has been going on for years, but it’s slowly catching on as many states pass wage increases. But tipped workers are especially hit hard by a lack of fair wage laws because they only make $2.13 an hour, relying on the kindness of customers for tips to get by.

That is unbelievably unfair, and Ocasio-Cortez understands that struggle because she used to be a tipped worker before she become one of the most popular lawmakers in Congress. This is an issue she deeply cares about.

To help shine a light on the plight of tipped workers and promote raising the minimum wage in the process, she visited a local bar where she made drinks and waited tables, using the opportunity to educate people.

“All labor has dignity and the way that we give labor dignity is by giving people the respect and the value that they are worth,” she said from behind the bar,” she said. “We have to make one fair wage and we have to raise the national minimum wage to $15 an hour.”

“All labor has dignity,” @AOC says. “We have to raise the national minimum wage to $15 an hour” pic.twitter.com/1lKIDJCOn4

She then spoke up for tipped workers.

“When we talk about the need for a fair wage, it is so real, the amount of exploitation and harassment and labor violations that you will endure for the sake and the structure of tipped work,” she said. “The federal minimum wage for tipped workers is $2.13 an hour. That is unacceptable. Any job that pays $2.13 an hour is not a job. It’s indentured servitude.”

@AOC: “Any job that pays $2.13 an hour is not a job. It’s indentured servitude.” pic.twitter.com/BqI5TPeSXT

AOC admitted that she was nervous about making beverages again but it all came back to her like riding a bike.

I was nervous that I may have lost my touch – still got it! That muscle memory doesn’t quit ?

Now let’s pass #RaiseTheWage and get $15 an hour minimum for every worker in America. pic.twitter.com/FR0ARUB7bd

And she also talked to patrons about a fair wage while serving those drinks.

.@AOC back behind the bar pouring red wine and talking federal minimum wage boost for tipped workers during event in Jackson Heights. pic.twitter.com/amfaRnZ4tp

Ocasio-Cortez is clearly a woman of the people who is fighting for a better life for all of us, especially those of us who work paycheck to paycheck. This is why she is popular and why her ideas are being embraced. Her ability to make an awesome drink certainly adds to her overall appeal.

Too many Americans are struggling to make ends meet and no one should have to work multiple jobs to make enough money to care of their families. Corporate profits have skyrocketed while wages have remained stagnant. The federal minimum wage is still $7.25 an hour, and that needs to change.