The United States Blues
Home News April Ryan DESTROYS Mike Huckabee in Twitter feud: ‘Will you get into... 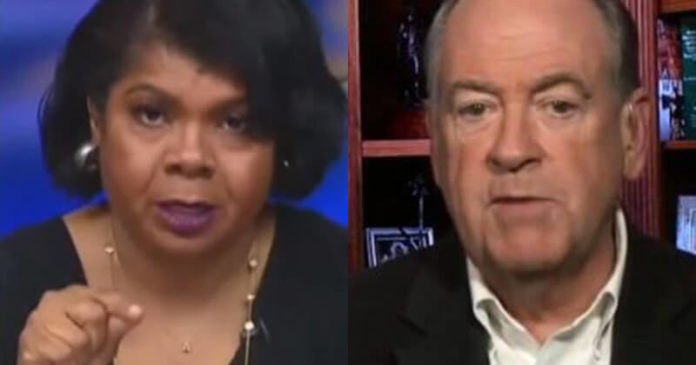 White House correspondent and CNN political analyst April Ryan got into a Twitter war with former Arkansas Governor Mike Huckabee after she criticized his daughter — White House Press Secretary Sarah Sanders — and said the press secretary needed to be fired for her constant lying.

On CNN Friday, Ryan had this to say about Sarah Sanders, who was mentioned in the report from Special Counsel Robert Mueller as having blatantly lied about the firing of former FBI Director James Comey:

“She outright lied, and the people, the American people, can’t trust her. They can’t trust what’s said from the president’s mouthpiece, spokesperson, from the people’s house.

“When there is a lack of credibility there, you have to start and start lopping the heads off. It’s ‘Fire Me Thursday’ or ‘Fire Me Good Friday.’ She needs to go.”

That sent Mike Huckabee to Twitter in full whine mode:

So liberals—is this okay?Does CNN have the integrity to deal w/ this incitement to murder? CNN’s April Ryan Says Sarah Sanders’ Head Should Be “Lopped Off” https://t.co/8fdYiOzggf

Of course, if Donald Trump had said the same thing, Mike would have insisted it was merely a figure of speech and no big deal. That’s what pretend Christian hypocrites always do when it comes to the current president.

For her part, Ryan was equal to Huckabee’s pathetic moanings:

You sir need to sit down. You gave me a veiled threat not long ago. You call yourself a man of God? Boy bye! As your people come for me! My people see you and will do the same for you! https://t.co/M72QQACjqV

Hey Mike you said I should be gutted like a dear. Do you remember? Don’t lie! God is watching and I have tape! https://t.co/M72QQACjqV

By the way you should be celebrating Good Friday or do you even remember Jesus anymore? He would not come down from the cross just to save himself! He decided to die… https://t.co/M72QQACjqV

But that just made Mike act even more childish, firing off this retort:

Will the ⁦@whca⁩ revoke April Ryan’s credentials? If not, they are gutless tools. CNN’s April Ryan Says Sarah Sanders’ Head Should Be “Lopped Off” https://t.co/8fdYiOzggf

That was a BIG mistake on Huckabee’s part, because Ryan burned him to a crisp with this brilliant response:

Will you get into heaven? The answer is no! https://t.co/oUpSVVbLx2

You and your daughter are liars and Why is she getting paid to be press secretary if there are no briefings. Why is she afraid? https://t.co/oUpSVVbLx2

As I thank God this day and for his sacrifice as you should be doing, I have a warning for you! If anything happens to me or mine or anyone connected to me, you and your daughter and this administration will be held accountable! So you better stop now! https://t.co/oUpSVVbLx2

And THAT is how you drop the mic on Mike.