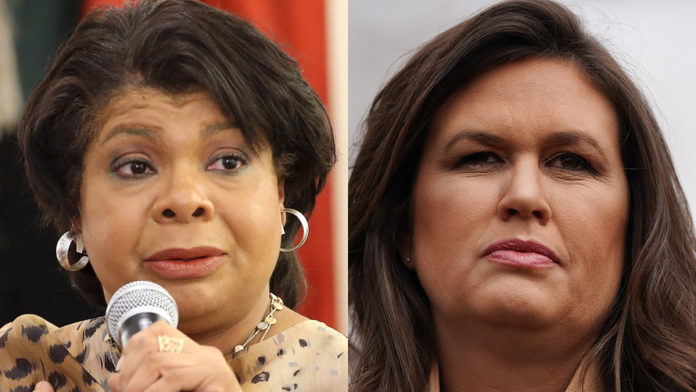 April Ryan, the White House correspondent for American Urban Radio Networks, made it clear Friday on Instagram that press secretary Sarah Sanders won’t be missed by members of the media, and she also let the world know why she won’t be attending the farewell party being held next week for the press secretary.

Ryan begins by noting that Sanders almost never does the job she’s paid to do: Briefing the press on a daily basis:

“I’m on a cross-country flight and very disturbed that in the midst of serious issues of possible strikes against Iran that there was no briefing by Sarah Huckabee Sanders. In over 100+ days, the day that she should have had a briefing, she didn’t. Serious issues of life and death. Serious issues of war. And this administration chooses not to brief the American public? Shame.”

But Ryan was far from done, adding:

“Everything comes to the White House from war to peace — and everything in between. And there was potential war. And no one stood at that podium to explain to the American public what was going on. But we see it in a tweet. We deserve better.”

As for that party some members of the media have planned as Sanders leaves the administration, Ryan made it clear that no one should expect her to attend:

“Sarah Huckabee, have your party. I won’t be there. Girl, bye!”

If anyone thinks Ryan was overly harsh with the press secretary, take a moment and consider some of the utterly ridiculous things Sanders has said during her tenure at the White House:

No one will miss Sarah Sanders. She could easily be replaced by a potted plant.

We Deserve Better: It has been 100+ days since we’ve had a White House press briefing. It’s unacceptable and the American people deserve better. Our nation faced potential war and Sarah Sanders didn’t prepare any of us. Shameful! #WhiteHouse #FreedomOfThePress #SarahSanders