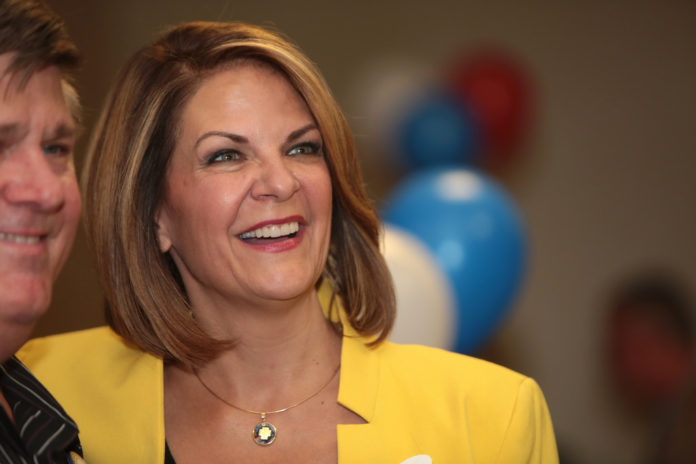 It’s one of President Trump’s favorite expressions. Whenever there’s a report that’s critical of the president or White House, he’ll immediately call it fake news.

As it turns out, a member of Trump’s own party in Arizona recently got caught engaging in a bit of fake news herself.

Kelli Ward is running in the Arizona GOP primary for the U.S. Senate seat being vacated by Jeff Flake. Late last year, she posted a link to an endorsement from the Arizona Monitior which criticized her Republican opponents and lauded her:

“Despite how much some of them profess their love and devotion to President Trump, didn’t have the stones to run against Jeff Flake and will have made the ‘brave’ decision to run for Senate only after Flake decided he wasn’t going to run … Kelli Ward is your woman.”

“Is an anonymous, pro-Ward blog that has referred to her primary opponent Martha McSally as ‘Shifty McSally,’ frequently blasted Flake and, at the top of its home page, proclaims its mission as ‘Striking Fear into the Heart of the Establishment.’ The site launched just a few weeks before publishing the endorsement, and its domain registration is hidden, masking the identity of its owner.”

And the Arizona Monitor is part of a larger trend taking place in right-wing media, as Kathleen Hall Jamieson, director of the Annenberg Public Policy Center at the University of Pennsylvania noted:

“This basically is an appropriation of credibility. As the credibility of reputable news outlets is appropriated for partisan purposes, we are going to undermine the capacity of legitimate outlets to signal their trustworthiness.”

In other words,  fake news sites make everything — even legitimate news — appear to be fake.

When Ward was asked about the Monitor endorsement, she commented:

“FYI – I have no idea who runs it and have no connection to it. I actually don’t know if I’ve ever read a story from there.”

Then why play up a positive review from a site you’ve never even bothered to look at?

Conservative sites that pretend to be legitimate news outlets are proliferating. Last September, the Associated Press caught the Republican Governor’s Association operating a news site under the name The Free Telegraph. Once they’d been exposed, the RGA added added a small disclaimer at the bottom of the home page:

“Paid for by Republican Governors Association.”

That message was later removed from the Free Telegraph site.

Charles Glasser, adjunct professor of media law and ethics at New York University, says fake news sites make the job of hostile countries such as Russia that much easier:

“The entry cost of creating a fake news page is insignificant, so you don’t have to be the Kremlin. It’s really, I think, the next step; it’s a very obvious and logical evolution in the history of electronic disinformation.”