The United States Blues
Home News Former Arizona Governor Jan Brewer Is Too Excited About Troops At The... 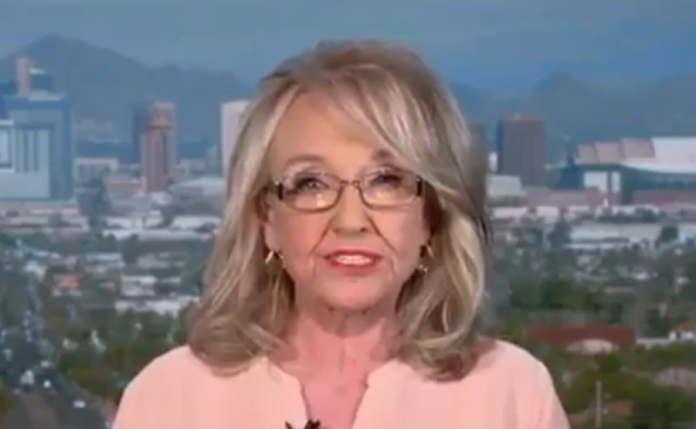 Former Arizona Governor Jan Brewer (R), the same governor who signed a racist “papers please” law that the Supreme Court partially struck down in 2012, is thrilled that President Donald Trump is militarizing the southern border with Mexico.

Trump made the announcement earlier this month and signed a memorandum giving Secretary of Defense James Mattis the authority to request National Guard troops be sent to the border.

However, states can legally refuse to send their National Guard units, and several governors have done exactly that, including Oregon Governor Kate Brown.

But Arizona, a red state, is sending troops, and former Arizona Governor Jan Brewer fully supports placing American soldiers on the border despite the fact that border crossings are at a 17-year low and our border is already pretty tightly secured.

During an interview on Fox News, Brewer cheered Trump on.

“I think it’s terrific news. I think that President Trump is taking real steps to secure our border. He is delivering on his promises, and I’m excited and encouraged that they’re sending the National Guard to the border and here in Arizona we’re going to send 150, starting next week.”

Brewer then went on to criticize governors who have refused to send their own National Guard units.

They’re just sitting on their hands and doing nothing. They’re not taking the issue seriously. I think they ought to think about what their oath of office is in regards to protecting their citizens, and they need to respect the federal authority. It’s outrageous that they’re doing what they’re doing. These governors that are turning a blind eye, are certainly not serving their constituency or their state or the United States of America.”

Here’s the video via Crooks & Liars:

Again, states can legally refuse to send National Guard troops to the border. Trump did not federalize the National Guard and his memorandum leaves the decision up to the states.

“Under U.S. Code Title 32, which Trump used as the basis for his proclamation, the federally funded troops remain under state control, sent only at the determination of a participating state’s governor.”

So far, it is unknown how many troops will be going to the border, how long they will be there, and most importantly, how much it will cost.

Trump decided to send troops in response to Congress’ refusal to fund his proposed border wall, a useless structure that would cost taxpayers around $30 billion to build.

And the majority of undocumented immigrants are fleeing to the United States to escape violence and suffering in their homeland. Many of them are families and children who pose no threat to our national security.

Trump is using immigration as a lightning rod to pander to racist conservatives like Brewer, and they are eating up everything he says and proposes, even if it does slowly turn America into an authoritarian nation.

Let’s not forget that the Soviet Union once built a wall to keep people from crossing a border. Now Trump is determined to build his own version of an Iron Curtain.