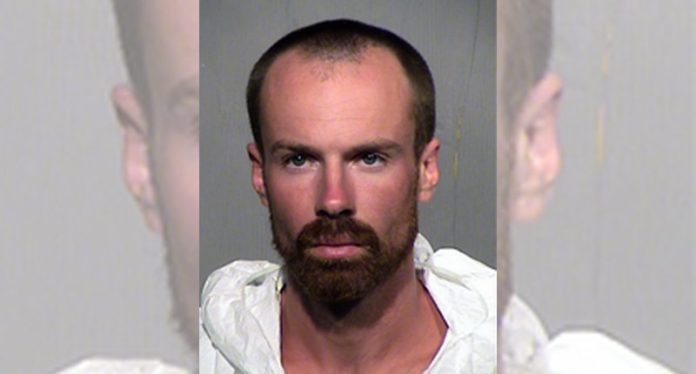 A man recently released from prison is back behind bars for allegedly stabbing and slitting the throat of a black teenager for no other reason than because he says he felt threatened by the rap music playing in the teen’s car.

27-year-old Michael Paul Adams, admitted to stabbing the teenager at about 1:42 a.m. Thursday after he heard him playing rap music in his vehicle in the Circle K parking lot, according to police records filed in Superior Court.

Adams had just been released from the Arizona State Prison Complex in Yuma on Tuesday, according to the Arizona Department of Corrections.

Adams also told police that rap music makes him feel “unsafe” because he’s been attacked by people who listen to rap in the past. He also said that any person who listens to rap music is a threat to him and the community.

The Republic also notes that Adams told authorities he didn’t personally feel threatened by the teenager, whom he attacked with a pocketknife:

The suspect said he felt threatened by the music — not the teen himself — so he needed to be “proactive rather than reactive,” police records said.

Surveillance footage shows the teen walking into the convenience store and Adams walking in a few seconds later. Adams walked around the store before lunging at the teen, according to records.

The suspect has an extensive criminal record, including  theft, shoplifting, marijuana violation, disorderly conduct, assault with a weapon, and the aggravated assault of a correctional employee.

Jacie Cotterell, an attorney for Adams, said his client never received access to mental health services after his release from incarceration:

She said that he was “set up for failure.”

Adams needed to see a mental health counselor but he was not given a way to access those resources, Cotterell said. “To be specific, he was given resources, he wasn’t given means to get to those resources,” she said.

She said Adams’ family did not know where he was after his release. “He was on the street,” she said.

Adams was booked on suspicion of first-degree premeditated murder and is being held on a $1 million bond. His first preliminary court hearing is scheduled for July 15.