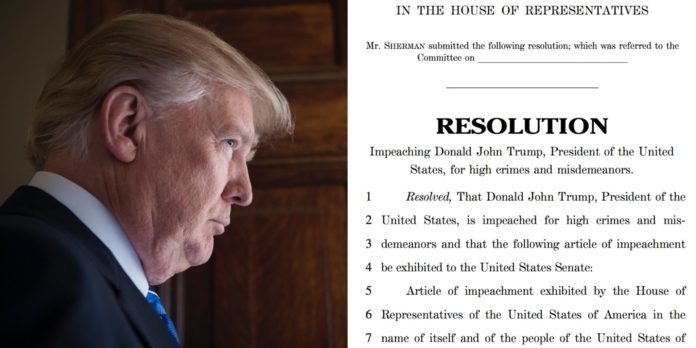 Democrats take control of the House of Representatives today, and shortly after all 435 members are sworn in, articles of impeachment will be filed against President Donald Trump. They will be filed by Rep. Brad Sherman (D) of California, according to the Los Angeles Times:

“Sherman’s articles of impeachment accuse Trump of obstructing justice by firing former FBI Director James B. Comey, among other wrongdoing.

“‘There is no reason it shouldn’t be before the Congress,’ Sherman said in an interview. Every day, Donald Trump shows that leaving the White House would be good for our country.'”

Incoming Speaker of the House Nancy Pelosi said just a month ago that she had ruled out impeachment for the time being, but indicated in an interview with the “Today” show Thursday that she would not rule out removing Trump from office via impeachment She added that wants to wait for Special Counsel Robert Mueller’s report.

In that same interview, Pelosi also noted that she thinks Trump can indeed be indicted for crimes he may have committed, saying the issue is not settled law and that “everything indicates” a “president can be indicted after he is no longer president of the United States.”

A recent poll showed that 60 percent of Americans support impeaching or censuring Trump, and comments on social media in reaction to Pelosi’s remarks certainly seem to bolster that poll:

The sooner he is ousted, the better it will be for all Americans.

Nor should she – above the law in America must include the powerful and privileged including our politicians and absolutely including presidents when need be, which should be never…but… #indictment #impeachment #trumpresign #NancyPelosi

It’s in the Constitution. Every member of Congress takes an oath to uphold. Why would she rule it out?

Looks like 2019 is starting off to be the worst of Donald Trump’s life.