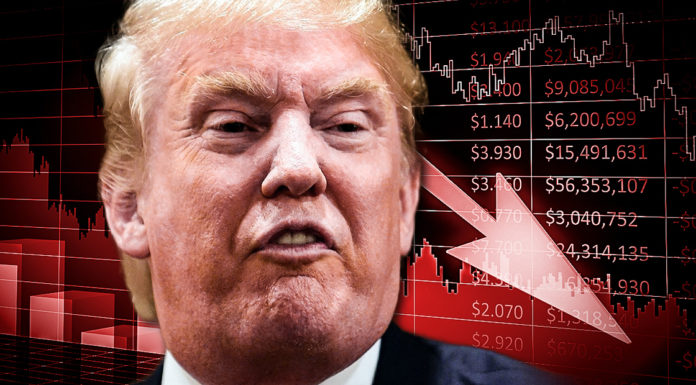 On Monday, as the Dow Jones Industrial Average again sank to a new low, President Donald Trump doubled down on his attacks aimed at the Federal Reserve, suggesting on Twitter that the only problem with the U.S. economy is a slight uptick in the interest rate to 2.5 percent, which remains incredibly low:

The only problem our economy has is the Fed. They don’t have a feel for the Market, they don’t understand necessary Trade Wars or Strong Dollars or even Democrat Shutdowns over Borders. The Fed is like a powerful golfer who can’t score because he has no touch – he can’t putt!

Within minutes of that tweet, the market dropped 150 points, threatening to dive below the 22,000 mark.

But the real reason the president is so upset with the Federal Reserve and its chairman, Jerome Powell (who was appointed by Trump), according to Bloomberg, is because each hike in the interest rate costs him money on the millions he owes in loans:

“Every time the Fed raises rates, Trump’s payments on some $340 million in variable-rate loans go up. Since his January 2017 inauguration, the Fed’s steady rate hikes may have added a cumulative $5.1 million a year to his debt service costs, according to a Bloomberg News analysis of the president’s financial disclosures and property records.”

Every time the Fed raises rates, Trump’s payments on some $340 million in variable-rate loans go up https://t.co/j8pHHlADCB

As with everything, Trump only gives a damn if something impacts him; the rest of us are on our own.

In recent weeks, there have even been suggestions that Trump has discussed removing Powell as Fed chair and replacing him with Jared Kushner, which would all but guarantee a complete stock market meltdown and global depression.

Social media was only too happy to remind Trump that he owns the bad stock market and is the one to blame for an ongoing trade and tariff war:

This is coming from DonaldTrump who inherited his businesses and wealth from his daddy, but still managed to file bankruptcy 5 times. ?

List of people you trust: Putin; Kim; Erdogan and Xi

This seems to be a YOU problem, bro. https://t.co/kfMIN1MUUd

Nah man your tax cuts to the corporations along with ongoing trade wars with our allies is what’s triggering the market. You rode the Obama wave for 2 years now it’s your time to shine.

The market has lost 150+ points since you tweeted this! pic.twitter.com/hIb4upmWdX

So, to sum things up: The government is in a shutdown, the stock market is in free fall, our allies no longer trust us, and a 72-year-old man-baby is whining that everything is everyone else’s fault. Yep, it’s just another day in Mr. Donnie’s neighborhood.